The Kinks came up with one of my favorite album titles, Everybody’s in Show Biz. True dat. Everyone wants to be a star; movie star, rock star, top dog, grand vizier, whatever. Of course the reality is that everyone can’t be. And those that do make it to the toppermost of the poppermost rarely get there on raw talent alone. One of the secrets? Good management; particularly evident when one considers the pantheon of rock ‘n’ roll.

While The Beatles, The Rolling Stones, and Led Zeppelin were certainly destined to make great music, it’s fun to speculate how differently their careers might have played out had they never hooked up with Brian Epstein, Andrew Loog Oldham and Peter Grant (respectively) at the right place and the right time (Tonite: Puppet show and Spinal Tap!).

Which brings us to another iconic rock act, The Who, four gifted but somewhat (initially) rudderless blokes who arguably had the most to gain from bumping into the right handlers at the right time. Kit Lambert and Chris Stamp may not be household names like Pete Townshend, Roger Daltrey, Keith Moon and John Entwistle, but for all intents and purposes, they were (for a crucial formative period) the 5th and 6th members of the Who.

In his cheeky and absorbing documentary, Lambert and Stamp, which slipped in and out of theaters this past summer and is now available on home video, director James Cooper draws from a trove of archival footage, adding latter-day interviews to recount this unique creative partnership which on paper, should not have worked out as well as it did.

The two men could not have been any different in social background and personality makeup. Lambert was gay, cultured, privileged; the son of a famous composer-conductor, he spoke with what the British refer to as a “posh” accent. Stamp, on the other hand, was straight, working class, the son of a tugboat operator, an East Ender replete with Cockney h-dropping.

Together, they created a formidable entity; like the Who themselves, the whole was greater than the sum of the parts. Cooper gets much mileage from that disparate personality quotient; drawing parallels between Lambert and Stamp’s dynamic with that famously volatile “push me-pull you” tension that made The Who…The Who.

A lot of the story is one happy accident after the other, so I won’t spoil it here. It wasn’t all sunshine and lollipops; Cooper gives us the ups and the downs. Stamp was still alive when Cooper began working on his film (he died in 2012), so we get the benefit of his latter-day perspective. Stamp’s famous acting sibling Terrence (“Kneel before Zod!”) is also on hand to add a few observations.

Unfortunately, Lambert died in 1981, so he is relegated to archival snippets. This obviously robs him of the luxury to share benefit of hindsight, and entrusts his legacy to the comments of associates like Townshend and Daltrey, who help fill in some of those cracks. While not the best place to start for neophytes, hardcore Who fans will appreciate Cooper’s fresh angle on familiar material.

So Lambert & Stamp may not be for everyone; here are 3 Who flicks no one should miss: 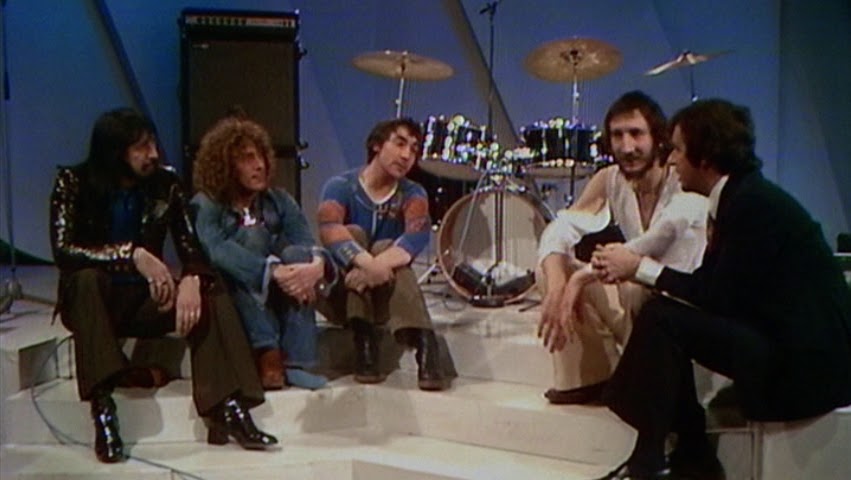 The Kids Are Alright– Director (and super fan) Jeff Stein’s 1979 labor of love is not only the ultimate Who film, but one of the best rockumentaries I have ever seen. It’s a truly amazing compendium, curating every worthwhile archival performance clip extant, from the band’s earliest TV appearances in the U.K, to The Smothers Brothers Comedy Hour, The Rolling Stones Rock and Roll Circus, and feature films like Woodstock and Monterey Pop. Stein also folds in a generous helping of archival interview snippets.

There’s no traditional narration; Stein cleverly edits the footage in a manner that essentially enables the Who to tell their own story. His only acquiescence to the tradition of adding “present day” perspective was (in hindsight) a prescient move; a concert staged exclusively for the film in 1977, beautifully shot in 35mm (the band tears it up with rousing renditions of “Baba O’Reilly” and “Won’t Get Fooled Again”). Sadly, this turned out to be the final filmed performance of the original lineup; Keith Moon died in 1978 (footage of the band’s entire set was restored and released on Blu-ray as The Who at the Kilburn 1977).

Quadrophenia– The Who’s eponymous 1973 double-LP rock opera, Pete Townshend’s musical love letter to the band’s first g-g-generation of most rabid British fans (aka the “Mods”) inspired this memorable 1979 film from director Franc Roddam. With the 1964 “youth riots” that took place at the seaside resort town of Brighton as his catalyst, Roddam fires up a visceral character study in the tradition of the British “kitchen sink” dramas that flourished in the early 1960s.

Phil Daniels gives a James Dean-worthy performance as teenage “Mod” Jimmy. Bedecked in their trademark designer suits and Parka jackets, Jimmy and his Who-loving compatriots cruise around London on their Vespa and Lambretta scooters, looking for pills to pop, parties to crash and “Rockers” to rumble with.

The Rockers are identifiable by their greased-back hair, leathers, motorbikes, and their musical preference for likes of Elvis and Gene Vincent. Look for a very young Ray Winstone (as a Rocker) and Sting (as a Mod bell-boy, no less). Wonderfully acted by a spirited cast, it’s a heady mix of youthful angst and raging hormones, super-charged by the power chord-infused grandeur of the Who’s music.

Tommy– There was a time (a long, long, time ago) when some of my friends insisted that the best way to appreciate The Who’s legendary rock opera was to turn off the lamps, light a candle, drop a tab of acid and listen to all four sides with a good pair of cans. I never got around to making those precise arrangements, but it’s a pretty good bet that watching director Ken Russell’s insane screen adaptation is a close approximation. If you’re not familiar with his work, hang on to your hat (I’ll put it this way-Russell is not known for being subtle).

Luckily, the Who’s music is powerful enough to cut through all the visual clutter, and carries the day. Two band members have roles-Roger Daltrey is charismatic as the deaf dumb and blind Tommy, and Keith Moon has a cameo as wicked Uncle Ernie (Pete Townshend and John Entwistle only appear in music performance).

And we just have enough time left for a quick one…