In honor of Martin Luther King Day, I’ve combed my review archives and curated 10 films that reflect on race relations in America; some that look back at where we’ve been, some that give us a reality check on where we’re at now and maybe even one or two that offer hope for the future. We still may not have quite reached that “promised land” of colorblind equality, but each of us doing whatever we can in our own small way to help keep Dr. King’s legacy alive will surely help light the way-especially in these dark times.

Black KkKlansman (2018)– So what do you get if you cross Cyrano de Bergerac with Blazing Saddles? You might get Spike Lee’s Black KkKlansman. That is not to say that Lee’s film is a knee-slapping comedy; far from it. Lee takes the true story of Ron Stallworth (John David Washington), an African-American undercover cop who managed to infiltrate the KKK in Colorado in the early 70s and runs with it, in his inimitable fashion.

I think this is Lee’s most affecting and hard-hitting film since Do the Right Thing (1989). The screenplay (adapted by Charlie Wachtel, David Rabinowitz, Kevin Willmott and Lee from Stallworth’s eponymous memoir) is equal parts biopic, docudrama, police procedural and social commentary, finding a nice balance of drama, humor and suspense. (Full review)

The Black Power Mixtape (2011)–Historically, the Black Power movement of the mid-60s to mid-70s has been somewhat misrepresented, with a tendency to spotlight its more sensationalist elements. The time is ripe to re-examine the movement, which despite its flaws, represents one of the last truly progressive grass roots political awakenings we’ve had in this country (if you’re expecting bandolier-wearing, pistol-waving interviewees spouting fiery Marxist-tinged rhetoric-dispense with that hoary stereotype now).

Director Goran Olsson was given access to a trove of vintage yet pristine 16mm footage that had been tucked away for years in the basement of Swedish Television; representing a decade of candid interviews with movement leaders, as well as meticulous documentation of Black Panther Party activities. Olsson presents the clips in a historically chronological timeline, with minimal commentary. While not perfect, it is an essential document, and one of the more eye-opening films I have seen on this subject. (Full review)

The Boys of Baraka (2005) – Co-directors Heidi Ewing and Rachel Grady deliver a fresh take on a well-worn cause celebre: the sad, shameful state of America’s inner-city school system. Eschewing the usual hand-wringing about the underfunded, over-crowded, glorified daycare centers that many of these institutions have become for poor, disenfranchised urban youth, the filmmakers chose to showcase one program that strove to make a real difference.

The story follows a group of 12-year-old boys from Baltimore who attended a boarding school in Kenya, staffed by American teachers and social workers. In addition to more personalized tutoring, there was emphasis on conflict resolution through communication, tempered by a “tough love” approach. The events that unfold from this bold social experiment (filmed over a three year period) are alternately inspiring and heartbreaking. (Full review)

The Force (2017) – Peter Nicks’ documentary examines the rocky relationship between Oakland’s police department and its communities of color. The force has been under federal oversight since 2002, due to myriad misconduct cases. Nicks utilizes the same cinema verite techniques that made his film The Waiting Room so compelling. It’s like a real-life Joseph Wambaugh novel (The Choirboys comes to mind). The film offers no easy answers-but delivers an intimate, insightful glimpse at both sides. (Full review)

The Girls in the Band (2011)– Contextual to a curiously overlooked component within the annals of American jazz music, it’s tempting to extrapolate on Dr. King’s dream. Wouldn’t it be great to live in a nation where one is not only primarily judged by content of character, but can also be judged on the merits of creativity, or the pure aesthetics of artistic expression, as opposed to being judged solely by the color of one’s skin…or perhaps gender? At the end of the day, what is a “black”, or a “female” jazz musician? Why is it that a Dave Brubeck is never referred to as a “white” or “male” jazz musician?

In her film, director Judy Chaikin chronicles the largely unsung contributions that female jazz musicians (a large portion of them African-American) have made (and continue to make) to this highly influential American art form. Utilizing rare archival footage and interviews with veteran and contemporary players, Chaikin has assembled an absorbing, poignant, and celebratory piece. (Full review)

I Am Not Your Negro (2016)– The late writer and social observer James Baldwin once said that “Whatever white people do not know about Negroes reveals, precisely and inexorably, what they do not know about themselves.” Sadly, thanks to the emboldening of certain elements within American society that have been drawn from the shadows by the openly racist rhetoric that spouted from the Former Occupant of the White House, truer words have never been spoken.

Indeed, anyone who watches Raoul Peck’s documentary will recognize not only the beauty of Baldwin’s prose, but the prescience of such observations. Both are on display in Peck’s timely treatise on race relations in America, in which he mixes archival news footage, movie clips, and excerpts from Baldwin’s TV appearances with narration by an uncharacteristically subdued Samuel L. Jackson, reading excerpts from Baldwin’s unfinished book, Remember This House. An excellent and enlightening film. (Full review)

In the Heat of the Night (1967)–“They call me Mister Tibbs!” In this classic (which won 1967’s Best Picture Oscar) the late Sidney Poitier plays a cosmopolitan police detective from Philly who gets waylaid in a torpid Mississippi backwater, where he is reluctantly recruited into helping the bigoted sheriff (Rod Steiger) solve a local murder. Poitier nails his performance; you can feel Virgil Tibb’s pain as he tries to maintain his professional cool amidst a brace of surly rednecks, who throw up roadblocks at every turn.

While Steiger is outstanding as well, I find it ironic that he won “Best Actor in a leading role”, when Poitier was ostensibly the star of the film (it seems Hollywood didn’t get the film’s message). Sterling Silliphant’s brilliant screenplay (another Oscar) works as a crime thriller and a “fish out of water” story. Director Norman Jewison was nominated but didn’t score a win. Future director Hal Ashby won for Best Editing. Quincy Jones composed the soundtrack, and Ray Charles sings the sultry theme. (Full review)

The Landlord (1970)–Hal Ashby only directed a relative handful of films, but most, especially his 70’s output, were built to last (Harold and Maude, The Last Detail, Bound for Glory, Shampoo, Being There).

In The Landlord, Beau Bridges plays a trustafarian with “liberal views” that his conservative parents find troubling…especially after he buys a run-down inner-city tenement, with intentions to renovate. His subsequent involvement with the various black tenants is played sometimes for laughs, other times for intense drama, but always for real. The social satire and observations about race relations are dead-on, but never preachy or condescending.

Top-notch ensemble work, featuring a young Lou Gossett (with hair!) giving a memorable turn. The lovely Susan Anspach is hilarious as Bridge’s perpetually stoned and bemused sister. A scene featuring Pearl Bailey and Lee Grant getting drunk and bonding over a bottle of “sparkling” wine is a minor classic all on its own. Moses Gunn’s sharp screenplay was adapted from Kristin Hunter’s novel. They don’t make ‘em like this anymore-honest, bold, uncompromising, socially and politically meaningful, yet also entertaining. (Full review) 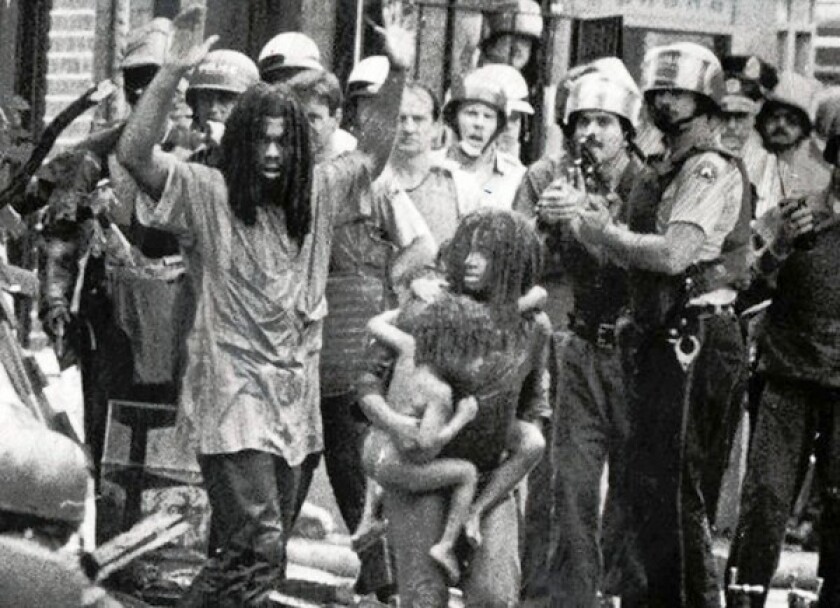 Let the Fire Burn (2013)– While obscured in public memory by the (relatively) more “recent” 1993 Branch Davidian siege in Waco, the eerily similar demise of the Philadelphia-based MOVE organization 8 years earlier was no less tragic on a human level, nor any less disconcerting in its ominous sociopolitical implications.

In this compelling documentary, director Jason Osder has parsed a trove of archival “live-at-the-scene” TV reports, deposition videos, law enforcement surveillance footage, and other sundry “found” footage (much of it previously unseen by the general public) and created a tight narrative that plays like an edge-of-your-seat political thriller.

Let the Fire Burn is not only an essential document of an American tragedy, but a cautionary tale and vital reminder of how far we have yet to go to completely purge the vestiges of institutional racism in this country. (Full review)

The Trials of Muhammad Ali (2013)– There have been a number of films documenting and dramatizing the extraordinary life of Muhammad Ali, but they all share a curious anomaly. Most have tended to gloss over Ali’s politically volatile “exile years” (1967-1970), during which the American sports icon was officially stripped of his heavyweight crown and essentially “banned” from professional boxing after his very public refusal to be inducted into the Army on the grounds of conscientious objection to the Vietnam War.

Director Bill Siegel (The Weather Underground) fills in those blanks in his documentary. As you watch the film, you begin to understand how Ali the sports icon transmogrified into an influential sociopolitical figure, even if he didn’t set out to become the latter. It was more an accident of history; Ali’s affiliation with the Nation of Islam and stance against the Vietnam War put him at the confluence of both the burgeoning Black Power and anti-war movements. How it all transpired makes an absorbing watch. (Full review)

Judas and the Black Messiah

When They See Us

Blood at the Root: An MLK Mixtape

The Trial of the Chicago 7

Now We See the Light: A Mixtape