Traditionally, Memorial Day Weekend triggers thoughts about upcoming summer getaways and/or road trips. After 2 months (and counting) of hunkering down in quarantine mode, most people are raring to go…anywhere really, beyond their neighborhood. A road trip to the county line would feel like a grand adventure at this point (“If I take one more step Mr. Frodo, I’ll be the farthest away from home I’ve been since March 11th!”). But pragmatism reminds us that a pandemic doesn’t take a breather on holidays, nor care a whit about summer vacations:

For the first time in 20 years, AAA will not issue a Memorial Day travel forecast, as the accuracy of the economic data used to create the forecast has been undermined by COVID-19. The annual forecast – which estimates the number of people traveling over the holiday weekend – will return next year.

Anecdotal reports suggest fewer people will hit the road compared to years past for what is considered the unofficial start of the summer travel season.

Memorial Day 2009 currently holds the record for the lowest travel volume at nearly 31 million travelers, according to AAA. That holiday weekend, which came toward the end of the Great Recession, 26.4 million Americans traveled by car, 2.1 million by plane and nearly 2 million by other forms of transportation (train, cruise, etc.).

AAA expects to make travel projections for the late summer and fall, assuming states ease travel restrictions and businesses reopen. Already, there are indications that Americans’ wanderlust is inspiring them to plan future vacations.

You can still take a (virtual) road trip this Memorial Day weekend with one or more of my picks for the Top 10 Road Movies:

Five Easy Pieces — “You see this sign?” Thanks to sharp direction from Bob Rafaelson, a memorable screenplay by Carole Eastman (billed in the credits as Adrien Joyce) and an iconic performance by Jack Nicholson, this remains one of the defining American road movies of the 1970s.

Nicholson portrays an antihero teetering on the edge of an existential meltdown; a classically-trained pianist from a moneyed family who nonetheless prefers to martyr himself working soulless blue-collar jobs.

Karen Black delivers one of her better performances as his long-suffering girlfriend. The late great DP Laszlo Kovacs makes excellent use of the verdant, rain-soaked Pacific Northwest milieu. And don’t forget where to hold the chicken salad…

Genevieve  — A marvelous entry from Britain’s golden age of screen comedies, this gentle 1953 film centers on the travails of an endearing young couple (Dinah Sheridan and John Gregson) as they join their bachelor friend (Kenneth Moore) and his latest flame (Kay Kendall) on their annual road trip from London to Brighton as participants in an antique car rally. After the two men have a bit of a verbal spat in Brighton, they decide to convert the return trip to London into a “friendly” race, with a 100-pound wager to be awarded to whoever is first across the Westminster Bridge.

Colorful, droll, and engaging throughout, especially thanks to Sheridan and Gregson’s onscreen chemistry. Oh, in case you were wondering- “Genevieve” is the name of the couple’s antique car! Director Henry Cornelius’ next project was I Am a Camera, the 1955 film that was reincarnated as the musical Cabaret.

Lost in America — Released at the height of Reaganomics, this 1985 gem can now be viewed in hindsight as a spot-on satirical smack down of the Yuppie cosmology that shaped the Decade of Greed.

Director/co-writer Albert Brooks and Julie Hagerty portray a 30-something, upwardly mobile couple who quit their high-paying jobs, liquidate their assets, buy a Winnebago, and hit the road with a “nest egg” of $145,000 to find themselves. Their goals are nebulous (“we’ll touch Indians”).

Unfortunately, due to unforeseen circumstances, the “egg” is soon off the table, and the couple find themselves on the wrong end of “trickle down”, to Brooks’ chagrin. Like most Brooks films, it is painful to watch yet so painfully funny (I consider him the founding father of the Larry David/Ricky Gervais school of “cringe comedy”).

As he zips through fictional states with in-jokey names like South Lyndon, Bergen, Tristana and Essex, he has increasingly bizarre and absurd encounters with a veritable “who’s who” of cult filmdom, including John Diehl, John Nance, Susan Tyrell, Michael J. Pollard, Mary Woronov, Meatloaf and Red-Hot Chili Peppers bassist Flea.

What I find particularly amusing is that none of the adults think to question why a 10-year-old (who curses like a sailor and sports a curious bit of stubble by film’s end) is driving a Mustang on a solo cross-country trip. Not for all tastes-definitely not one for the kids (especially since the venerable parental admonishment of “You’ll poke your eye out!” becomes fully realized). Director Barry Shils has only made one other film, the 1995 doc, Wigstock: The Movie.

Powwow Highway — A Native American road movie from 1989 that eschews stereotypes and tells its story with an unusual blend of social and magical realism. Gary Farmer (who resembles the young Jonathan Winters) plays Philbert, a hulking Cheyenne with a gentle soul who wolfs down cheeseburgers and chocolate malts with the countenance of a beatific Buddha. He has decided that it is time to “become a warrior” and leave the res on a vision quest to “gather power”.

After choosing a “war pony” for his journey (a rusted-out beater that he trades for with a bag of weed), he sets off, only to be waylaid by his childhood friend (A. Martinez) an A.I.M. activist who needs a lift to Santa Fe to bail out his sister, framed by the Feds on a possession beef. Funny, poignant, uplifting and richly rewarding. Director Jonathan Wacks and screenwriters Janey Heaney and Jean Stawarz keep it real. Look for cameos from Wes Studi and Graham Greene.

Radio On — You know how you develop an inexplicable emotional attachment to certain films? This no-budget 1979 offering from writer-director Christopher Petit, shot in stark B&W is one such film for me. That said, I should warn you that it is not going to be everyone’s cup of tea, as it contains one of those episodic narratives that may cause drowsiness for some after about 15 minutes. Yet, I am compelled to revisit this one annually. Go figure.

A dour London DJ (David Beames), whose estranged brother has committed suicide, heads to Bristol to get his sibling’s affairs in order and attempt to glean what drove him to such despair (while quite reminiscent of the setup for Get Carter, this is not a crime thriller…far from it). He has encounters with various characters, including a friendly German woman, an unbalanced British Army vet who served in Northern Ireland, and a rural gas-station attendant (a cameo by Sting) who kills time singing Eddie Cochran songs.

As the protagonist journeys across an England full of bleak yet perversely beautiful industrial landscapes in his boxy sedan, accompanied by a moody electronic score (mostly Kraftwerk and David Bowie) the film becomes hypnotic. A textbook example of how the cinema can capture and preserve the zeitgeist of an ephemeral moment (e.g. England on the cusp of the Thatcher era) like no other art form. 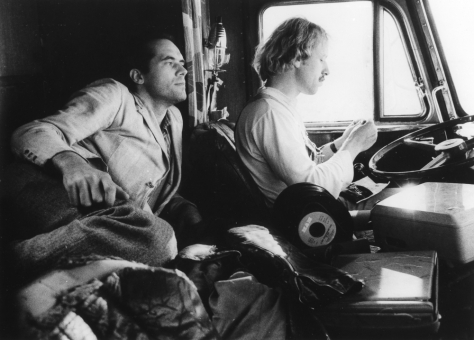 Kings of the Road  — Wim Wenders’ 1976 bookend of his “Road Movie Trilogy” (preceded by Alice in the Cities and The Wrong Move) is a Boudu Saved from Drowning-type tale with Rudiger Vogler as a traveling film projector repairman who happens upon  a suicidal psychologist (Hanns Zischler) just as he decides to end it all by driving his VW into a river. The traveling companions are slow to warm up to each other but have lots of screen time to develop a bond at 2 hours and 55 minutes (i.e., the film may try the patience of some viewers). If you can stick with it though-I think you will find it rewarding. 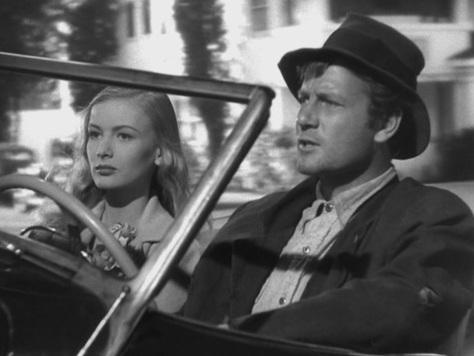 Sullivan’s Travels  — A deft mash-up of romantic screwball comedy, Hollywood satire, road movie and social drama that probably would not have worked so beautifully had not the great Preston Sturges been at the helm.

Joel McCrea is pitch-perfect as a director of goofy populist comedies who yearns to make a “meaningful” film. Racked with guilt about the comfortable bubble that his Hollywood success has afforded him and determined to learn firsthand how the other half lives, he hits the road with no money in his pocket and masquerades as a railroad tramp (to the chagrin of his handlers).

He is joined along the way by an aspiring actress (Veronica Lake, in one of her best comic performances). His voluntary crash-course in “social realism” turns into much more than he had originally bargained for. Lake and McCrea have wonderful chemistry. Many decades later, the Coen Brothers co-opted the title of the fictional “film within the film” here: O Brother, Where Art Thou?

The Trip — Pared down into feature length from the 2011 BBC TV series of the same name, Michael Winterbottom’s film is essentially a highlight reel of the 6 episodes; which is not to denigrate it, because it is the most genuinely hilarious comedy I’ve seen in years.

The levity is due in no small part to Steve Coogan and Rob Brydon, basically playing themselves. Coogan is commissioned by a British newspaper to take a “restaurant tour” of England’s bucolic Lake District and write reviews. He initially plans to take his girlfriend along, but since they’re going through a rocky period, he asks his pal, fellow actor and comedian Brydon, to accompany him.

This setup is basically an excuse to sit back and enjoy Coogan and Brydon’s brilliant comic riffing (much of it feels improvised) on everything from relationships to the “proper” way to do Michael Caine impressions. There’s unexpected poignancy as well-but for the most part, it’s comedy gold. The director and both stars reunited for two equally enjoyable sequels, The Trip to Italy (2014) and The Trip to Spain (2017).

Vanishing Point  — I don’t know if there was a sudden spike in sales for Dodge Challengers in 1971, but it would not surprise me, since nearly every car nut I have ever known usually gets a dreamy, faraway look in their eyes when I mention this cult classic, directed by Richard C. Sarafian. It’s best described as an existential car chase movie.

Barry Newman stars as Kowalski (there’s never a mention of a first name), a car delivery driver who is assigned to get a Challenger from Colorado to San Francisco. When someone wagers he can’t make the trip in less than 15 hours, he accepts the, erm, challenge. Naturally, someone in a muscle car pushing 100 mph across several states is going to eventually get the attention of law enforcement-and the chase is on.

Not much of a plot but nonetheless riveting. Episodic; one memorable vignette involves a hippie chick riding around the desert on a 350 Honda a la Lady Godiva, to the strains of Mountain’s “Mississippi Queen” (riveting!). Cleavon Little plays Supersoul-a blind radio DJ who pulls double duty as Kowalski’s guardian angel and a Greek Chorus for the narrative. The enigmatic ending still mystifies.

The Adventures of Priscilla, Queen of the Desert