I’m sure you are aware that the (host-challenged) Academy Awards ceremonies are coming up this Sunday (broadcasting on ABC). As an alleged “movie critic”, I will sheepishly admit that I have only seen 3 of the 8 nominees for 2018’s Best Picture. Then again, it’s been years since Academy voters and I have seen eye to eye as to what constitutes a “best picture”. Either my aesthetic has changed, or the Academy has lowered its standards. And I don’t think my aesthetic has changed, if you catch my drift.

At any rate, this is my way of explaining in advance why you may notice only one “Best Picture” winner from the last several decades made my list, which I have culled from the previous 90 Academy Awards. Perhaps it’s just my long-winded way of saying “they don’t make ‘em like they used to”. And I wish you kids would stay the hell off my lawn.

You Can’t Take it With You (Best Picture of 1938) – 81 years on, Frank Capra’s movie version of George S. Kaufman and Moss Hart’s stage play (adapted for the screen by Robert Riskin, who was nominated) still resonates in light of our current economic woes.

A Wall Street fat cat (Edward Arnold) comes up with various nefarious machinations to force a stubborn but happy-go-lucky homeowner (Lionel Barrymore) and his eccentric and free-spirited family to sell him his property, in order to make way for a new factory he wants to build in a prime metropolitan location.

Complications ensue when Barrymore’s granddaughter (Jean Arthur) falls in love with Arnold’s son (James Stewart). Hilarity abounds, fueled by contrasting worldviews of Arnold’s uptight, greedy capitalist and Barrymore’s fun-loving non-conformist. There’s tons of slapstick, and in accordance with the rules of screwball comedy, nearly the entire cast eventually ends up standing before a judge (en masse) with a lot of explaining to do.

Although this is one of Capra’s more lightweight films, he still folds in social commentary about the disparity between the haves vs. the have-nots; in some respects it seems like a warm-up for It’s a Wonderful Life. Capra also picked up a Best Director win.

Casablanca (Best Picture of 1943)-Romance, exotic intrigue, Bogie, Ingrid Bergman, evil Nazis, selfless acts of quiet heroism, Paul Henreid, Peter Lorre, Sidney Greenstreet, Rick’s Café, Claude Rains rounding up the usual suspects, Dooley singing “As Time Goes By”, the beginning of a beautiful friendship, the most rousing rendition of “La Marseille” you’ve ever heard, that goodbye scene at the airfield, and a timeless message (if you love someone, set them free). What’s not to love about this movie-lover’s movie?

From Here to Eternity (Best Picture of 1953) – Even though James Jones’ salty and steamy source novel about restless GIs stationed at Pearl Harbor was sanitized for the screen, Fred Zinnemann’s film was still fairly risqué and heady adult fare for its time.

Monty Clift was born to play the complex, angst-ridden company bugler (and sometime pugilist) Pvt. Robert E. Lee Prewitt, a classic “hard case” at constant loggerheads with his superiors (and his personal demons).

And what a cast-outstanding performances abound from Burt Lancaster, Deborah Kerr, Frank Sinatra (he won Best Actor in a Supporting Role), Jack Warden, Ernest Borgnine, and Donna Reed. At that point of Reed’s career, it was considered casting against type to have her playing a prostitute, but it paid off with a Best Actress in a Supporting Role win.

West Side Story (Best Picture of 1961)-You know, there are so many Deep Thoughts that I have gleaned as a result of my many, many viewings of this fine film over the years; and since I am holding the Talking Stick, I wish to share a few of them with you now: 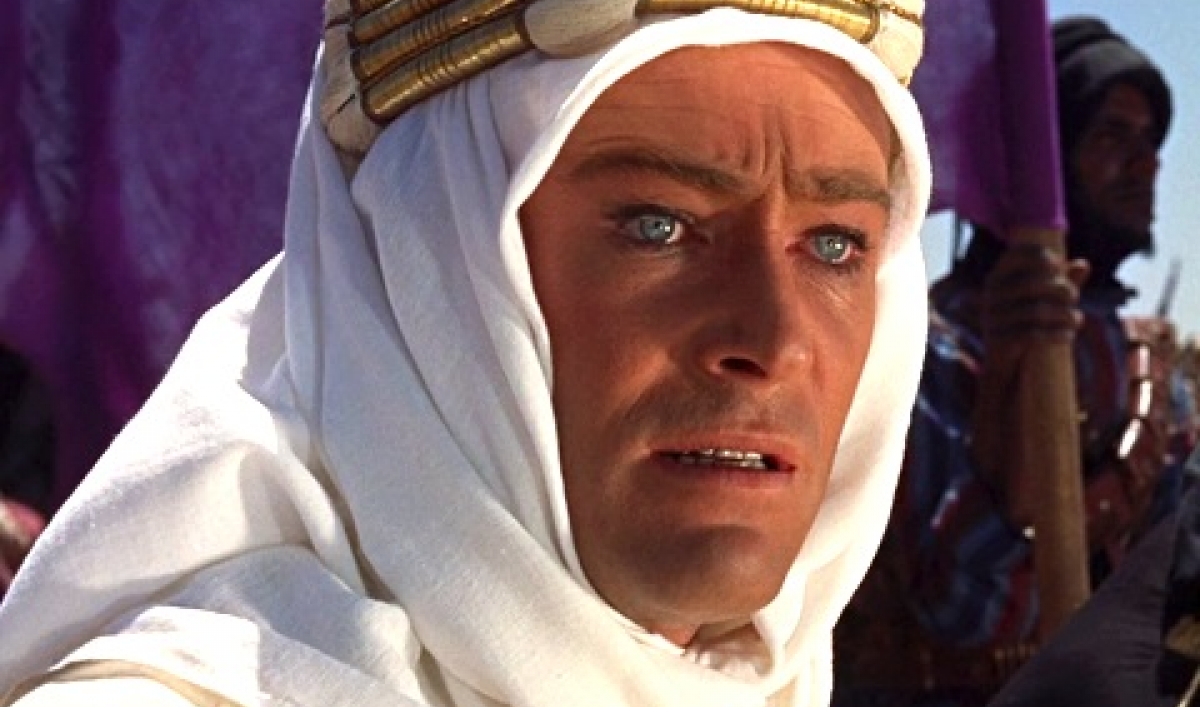 Lawrence of Arabia (Best Picture of 1962) – Until you have viewed David Lean’s masterpiece on a theater screen, you can’t really comprehend how big the desert is. Really big. You just won’t believe how vastly hugely mind-bogglingly big it is. Or how commanding and charismatic 29 year-old Peter O’Toole was in his first starring role.

O’Toole delivers a larger-than-life performance as T.E. Lawrence, a flamboyant and outspoken British army officer who reinvented himself as a guerilla leader, gathering up warring Arab tribes and uniting them in a common cause to oust the Turks during WW I.

Robert Bolt and Michael Wilson based their literate screenplay on Lawrence’s memoirs, sustaining a sense of intimacy throughout. This was no small feat, considering the film’s overall epic sweep and visual splendor (DP Freddie Young and editor Anne V. Coates more than earned their Oscars).

In the Heat of the Night (Best Picture of 1967) – “They call me Mister Tibbs!” In this classic film Sidney Poitier plays a cosmopolitan police detective from Philly who gets waylaid in a torpid Mississippi backwater, where he is reluctantly recruited into helping the bigoted sheriff (Rod Steiger) solve a local murder.

Poitier nails his performance; you can feel Virgil Tibb’s pain as he tries to maintain his professional cool amidst a brace of surly rednecks, who throw up roadblocks at every turn.

While Steiger is outstanding as well, I find it ironic that he was the one who won “Best Actor in a leading role”, when Poitier was the star of the film (it seems Hollywood didn’t get the film’s message).

Midnight Cowboy (Best Picture of 1969) – “I’m WALKIN’ heah!” Aside from its distinction as being the only X-rated film to ever win Oscars, John Schlesinger’s groundbreaking character study also helped usher in a new era of mature, gritty neo-realism in American film that would reach its apex in 1976 with Scorsese’s Taxi Driver (one year before Star Wars ushered that era to a full dead stop).

Dustin Hoffman has seldom matched his character work here as the Fagin-esque Ratso Rizzo, a homeless New York City con artist who adopts country bumpkin/aspiring male hustler Joe Buck (Jon Voight) as his “protégé”. The two leads are outstanding, as is the supporting cast, which includes John McGiver, Brenda Vaccaro, Barnard Hughes and a teenage Bob Balaban. Also look for cameos from several of Andy Warhol’s “Factory” regulars, who can be spotted milling about here and there in a memorable party scene.

In hindsight, the location filming provides us with a fascinating historical document of the seedy milieu that was “classic” Times Square (New York “plays itself” very well here). Schlesinger won an Oscar for Best Director, as did Waldo Salt for his screenplay.

In hindsight, the location filming provides us with a fascinating historical document of the seedy milieu that was “classic” Times Square (New York “plays itself” very well here). Schlesinger won an Oscar for Best Director, as did Waldo Salt for his screenplay.

The Godfather (Best Picture of 1972) and The Godfather, Part II (Best Picture of 1974)-Yes, I’m counting them as one; because in a narrative and artistic sense, they are. Got a problem with that? Tell it to Luca Brasi. Taken as a whole, Francis Ford Coppola’s two-part masterpiece is best summed up thusly: Brando, Pacino, and De Niro.

Annie Hall (Best Picture of 1977) – As far as his “earlier, funny films” go, this semi-autobiographical entry ranks as one of Woody Allen’s finest, and represents the moment he truly found his voice as a filmmaker. The Academy concurred, awarding three additional Oscars as well-for Best Actress (leading lady Diane Keaton, in her career-defining role), for Director (Allen) and for Best Original Screenplay (Allen again, along with co-writer Marshall Brickman).

Part 1 of a triptych (or so the theory goes) that continued with Manhattan and Hannah and Her Sisters, it is also the film that neatly divides the history of the romantic comedy in half. So many of the narrative framing techniques and comic inventions that Allen utilized have become so de rigueur for the genre (a relatively recent example would be The 500 Days of Summer) that it’s easy to forget how wonderfully innovative and fresh this film felt back in 1977. A funny, bittersweet, and perceptive look at modern romance.

No Country for Old Men (Best Picture of 2007) – The bodies pile up faster than you can say Blood Simple in Joel and Ethan Coen’s masterfully made neo-noir (which also earned them a shared Best Director trophy). The brothers’ Oscar-winning screenplay (adapted from the Cormac McCarthy novel) is rich in characterization and thankfully devoid of the self-conscious quirkiness that has left some of their latter-day films teetering on self-parody.

The story is set among the sagebrush and desert heat of the Tex-Mex border, where the deer and the antelope play. One day, pickup-drivin’ good ol’ boy Llewelyn (Josh Brolin) is shootin’ at some food (the playful antelope) when he encounters a grievously wounded pit bull. The blood trail leads to discovery of the grisly aftermath of a shootout. And yes, being that this is Coen country…that twisty trail does lead to a twisty tale.

Tommy Lee Jones gives a wonderful low-key performance as an old-school, Gary Cooper-ish lawman who (you guessed it) comes from a long line of lawmen. Jones’ face is a craggy, world-weary road map of someone who has reluctantly borne witness to every inhumanity man is capable of, and is counting down the days to his imminent retirement (‘cos it’s becoming no country for old men…).

The entire cast is outstanding. Javier Bardem picked up a Best Supporting Actor statue for his unforgettable turn as a psychotic hit man. His performance is understated, but menacing, made all the more creepy by his benign Peter Tork haircut. Kelly McDonald and Woody Harrelson are both excellent as well.

Curiously, Roger Deakins wasn’t even nominated for his outstanding cinematography, but his work on this film easily ranks among his best.