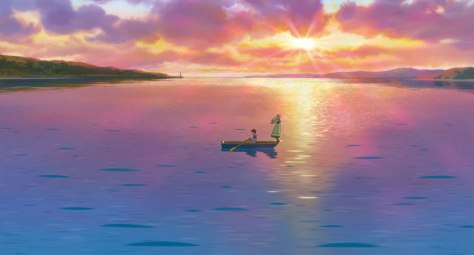 Japan’s Studio Ghibli has consistently raised the bar on the (nearly) lost art of cel animation (don’t get me started on my Pixar rant). While it’s sad that the undisputed master of anime (and Ghibli’s star director), Hayao Miyazaki, has now retired, it is heartening to know that the Studio still “has it”, as evidenced in this breathtakingly beautiful new anime film from writer-director Hiromasa Yonebayashi.

The story (adapted from a book by the late British author and illustrator Joan G. Robinson) centers on a 12 year-old girl named Anna (voiced by Sara Takatsuki in the subtitled Japanese version that this review is based upon). Anna, a budding artist, is an insular foster child whose health problems precipitate an extended visit to a seaside town, where she will stay with relatives while she mends. While exploring her new environs one day, she espies a rundown mansion at the edge of a marsh. She finds herself strangely drawn to the place, but doesn’t understand why. Unwittingly stranding herself there when the tide rises, she is rescued by a crusty (yet benign) fisherman. As night begins to fall, she thinks she sees lights in the windows of the abandoned structure. A mystery is afoot.

I don’t want to give anything away, as many twists and turns ensue, with a 4-handkerchief denouement that will leave only those with a heart of stone unmoved. It’s really a lovely story, with some of the most gorgeous animation I’ve seen from Ghibli. Gentle enough for children, but imbued with an intelligent, classical narrative compelling enough for adults. No dinosaurs, male strippers, killer androids, teddy bears with Tourette’s, explosions, car chases or blazing guns…just good old fashioned storytelling.