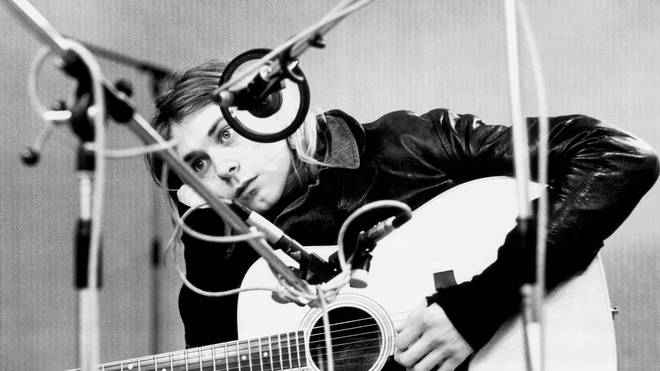 It’s virtually impossible to live here in Seattle and not be constantly reminded of Kurt Cobain’s profound impact on the music world. Every April, around the anniversary of his suicide, wreaths of flowers and hand taped notes begin to cover a lone bench in a tiny park sandwiched between the lakefront mansions I pass on my way to work every morning. Inevitably, I will see small gatherings of young people with multi-colored hair and torn jeans holding silent vigil around this makeshift shrine, located a block or two from the home where he took his life.

Needless to say, A.J. Schnack’s new rock doc Kurt Cobain: About a Son (scheduled to open in select cities in August) has certainly been a highly anticipated film here in the Emerald City (ironically, it premiered at the Toronto Film Festival last fall; I was surprised that the director, who took the stage after the film for Q & A at the SIFF screening I attended , wasn’t called out for this slight by any of the numerous flannel-wearing diehards in the audience).

Schnack’s  film is a unique, impressionistic portrait of Cobain’s short life. There are none of the usual talking head interviews or performance clips here; there’s nary a photo image of Cobain or Nirvana displayed until a good hour into the film. Schnack was given access to a series of frank and intimate audio interviews that Cobain recorded at his Seattle home circa 1992-1993. Schnack marries up Cobain’s childhood and teenage recollections with beautifully shot footage of Cobain’s hometown of Aberdeen and its environs.

The film is an antithesis to Nick Broomfield’s comparatively sensationalist rock doc Kurt and Courtney. Whereas Broomfield set out with a backhoe to dig up as much dirt as quickly as possible in attempting to uncover Cobain’s story, Schnack opts for a more carefully controlled excavation, gently brushing the dirt aside to expose the real artifact.

In French director Patrice Leconte latest film, Mon Meilleur Ami (“My Best Friend”), we are introduced to glum-faced antique dealer Francois Coste (Daneil Auteil) as he attends a funeral. After the service, Francois approaches the grieving widow and mutters a few perfunctory condolences. She doesn’t seem to recognize him; he explains that her husband was a client, then after pausing a beat, asks her if it would still be okay to stop by and take a look at a piece of furniture he had arranged to appraise for him before his unexpected demise. His faux pas (and the look she shoots him) tell us everything we need to know about our protagonist’s complete and utter lack of charm.

Later, at a dinner with clients, Francois tells his business partner Catherine (Julie Gayet) about the sad lack of attendees at the funeral, an image he can’t shake. Imagine leading such a pathetic, friendless existence that no one shows up at your funeral! Catherine seizes this moment to confront Francois about his own inability to connect with people, which he naturally denies. Flustered and humiliated, Francois accepts her challenge to produce a “best friend” within the week. Francois has his work cut out for him.

Serendipity leads Francois to the perfect mark-Bruno Bouley (Dany Boon) an outgoing cab driver who seems to have an effortless manner of ingratiating himself to strangers. As we get a closer look at Bruno, he seems an unlikely mentor; he is divorced, takes anti-depressants, lives alone in a tiny apartment next door to his elderly parents, where he spends all his spare time cutting out newspaper articles and memorizing trivial facts in hopes of someday winning a fortune on a quiz show.

Initially, Francois takes an anthropological approach; he observes Bruno with the same sort of bemused detachment that Alan Bates studied Anthony Quinn in Zorba the Greek. What is Bruno’s secret to connecting to people…to Life? In spite of his ulterior motives, Francois begins to develop a genuine bond with Bruno, leading to some ironic twists and complications. Uh-oh, you’re thinking-we’re going to learn Life Lessons about the value of True Friendship, aren’t we? (Cue the ABC After School Special theme…)

I was reminded a wee bit of another French film, Francis Veber’s 1999 social satire The Dinner Game, in which a group of snobs, for their amusement, challenge each other to feign friendship with an “idiot” and invite him to a special dinner night, competing to see who can produce the “biggest idiot”. And of course, the “idiot” gets the last laugh, and Lessons are Learned. (Apparently, the French adore “comedies” steeped in discomfiture.)

In his previous films, Leconte has displayed a knack for delivering compelling character studies that are wistful, brooding, darkly humorous yet simultaneously uplifting and life-affirming (his 2002 masterpiece The Man on the Train resonated with me in such a deeply profound manner that I have become emotionally attached to it). I wish I could say the same for Mon Meilleur Ami.

It is certainly not a “bad” film (even lesser Laconte stands head and shoulder above most Hollywood grist) but there is a bit too much contrivance in the third act that mixes uneasily with what has preceded. I would still recommend this film, especially for the wonderful performances. Auteil, one of France’s top actors, is always worth watching, and Boon delivers nary a false note with a funny and touching performance as the ebullient yet mentally fragile Bruno.