It’s been a dark week here in Seattle. I actually mean that in a good way. Film noir expert/revivalist Eddie Muller brought his “Noir City” mini-festival to town (sponsored here by SIFF), hosting seven days of screenings at local theaters. Muller’s traveling exhibition gives audiences around the country a chance to catch films from the “classic” noir cycle on the big screen. That’s what got me thinking about my favorite genre entries.

This is one of the toughest “top 10” lists I’ve tackled, because I could easily do a “top 100”. Out of the 3700 titles in my personal movie collection (I know…it’s an illness), over 800 fall in the noir/neo-noir/mystery categories. One could say I’m a little obsessed.

I had to narrow it down this way: which noirs have I re-watched the most times? That was the chief criteria behind these selections. So note going in that this is not designed to be my definitive assemblage of the most “historically important”, or “classic” noirs of all time (although several of these titles might be considered as such). These are purely personal favorites, so if this compels you to fire off a “You Philistine! I cannot believe you overlooked [insert title here]!!!” response, your indignation is duly noted beforehand.

One more note. I’m fully aware that most film scholar types generally define the “classic noir cycle” as cynical, darkly atmospheric B&W crime dramas produced between 1940 and 1959; consequently any similar entries going forward automatically get tossed into the “neo” noir bin. That said, there are some (like yours truly) who respectfully argue that the Force remains strong, at least through the mid-1970s. And so it goes. Alphabetically:

Ace in the Hole – Billy Wilder’s 1951 film is one of the bleakest noirs ever made:

Charles Tatum: What’s that big story to get me outta here? […] I’m stuck here, fans. Stuck for good. Unless you, Miss Deverich, instead of writing household hints about how to remove chili stains from blue jeans, get yourself involved in a trunk murder. How about it, Miss Deverich? I could do wonders with your dismembered body.

Charles Tatum: Or you, Mr. Wendell-if you’d only toss that cigar out the window. Real far…all the way to Los Alamos. And BOOM! (He chuckles) Now there would be a story.

Tatum (played to the hilt by Kirk Douglas) is a cynical big city newspaper reporter who drifts into a small New Mexico burg after burning one too many bridges with his former employers at a New York City daily. Determined to weasel his way back to the top (by any means necessary, as it turns out), he bullies his way into a gig with a local rag, where he impatiently awaits The Big Story that will rocket him back to the metropolitan beat.

He’s being sarcastic when he exhorts his co-workers in the sleepy hick town newsroom to get out there and make some news for him to capitalize on. But the irony in Wilder’s screenplay (co-written by Lesser Samuels and Walter Newman) is that this becomes a self-fulfilling prophesy for Tatum; in his attempt to purloin and manipulate the scenario of a man trapped in a cave-in into a star-making “exclusive” for himself, it’s Tatum who ultimately becomes The Big Story. Great writing, directing and acting make it a winner.

Chinatown – There are many Deep Thoughts that I have gleaned over the years via repeated viewings of Roman Polanski’s 1974 “sunshine noir”.

I’ve also learned that if you put together a great director (Polanski), a killer screenplay (by Robert Towne), two lead actors at the top of their game (Jack Nicholson and Faye Dunaway), an ace cinematographer (John A. Alonzo) and top it off with a perfect music score (by Jerry Goldsmith), you’ll produce a film that deserves to be called a “classic”.

The Friends of Eddie Coyle– This vastly under-appreciated 1973 crime drama/character study from director Peter Yates features one of the last truly great performances from genre icon Robert Mitchum, at his world-weary, sleepy-eyed best as an aging hood. Peter Boyle excels in a low-key performance as a low-rent hit man, as does Richard Jordan, playing a cynical and manipulative Fed. Steven Keats steals all his scenes as a scuzzy black market gun dealer. Paul Monash adapted his screenplay from the novel by George P. Higgins. A tough and lean slice of American neo-realism, enhanced by DP Victor J. Kemper’s gritty, atmospheric use of the autumnal Boston locales.

High and Low – Akira Kurosawa’s 1963 noir, adapted from Ed McBain’s crime thriller King’s Ransom, is so multi-leveled that it almost boggles the mind. Toshiro Mifune is excellent as a CEO who, at the possible risk of losing controlling shares of his own company, takes responsibility for helping to assure the safe return of his chauffeur’s son, who has been mistaken as his own child by kidnappers.

As the film progresses, the backdrop transitions subtly, and literally, from the executive’s comfortable, air conditioned mansion “high” above the city, to the “low”, sweltering back alleys where desperate souls will do anything to survive; a veritable descent into Hell.

On the surface, the film plays as a straightforward police procedural; it’s engrossing entertainment on that level. However, upon repeat viewings, it reveals itself as more than a genre piece. It’s about class struggle, corporate culture, and the socioeconomic complexities of modern society (for a 50 year old film, it feels quite contemporary).

Kiss Me Deadly – Robert Aldrich directed this influential 1955 pulp noir, adapted by A.I. Bezzerides from Mickey Spillane’s novel. Ralph Meeker is the epitome of cool as hard-boiled private detective Mike Hammer, who picks up a half-crazed (and half-naked) escapee from “the laughing house” (Cloris Leachman) one fateful evening after she flags him down on the highway. This sets off a chain of events that leads Hammer from run-ins with low-rent thugs to embroilment with a complex conspiracy involving a government scientist and a box of radioactive “whatsit” coveted by a number of interested parties.

The sometimes confounding plot takes a back seat to the film’s groundbreaking look and feel. The inventive camera angles, the expressive black and white cinematography (by Ernest Laszlo), the shocking violence, and the nihilism of the characters combine to make this quite unlike any other American film from the mid-50s.

The film is said to have had an influence on the French New Wave (you can see that link when you pair it up with Godard’s Breathless). British director Alex Cox paid homage in his 1984 cult film, Repo Man (both films include a crazed scientist driving around with a box of glowing radioactive material in the trunk), and Tarantino featured a suspiciously similar box of mysterious “whatsit” in Pulp Fiction. 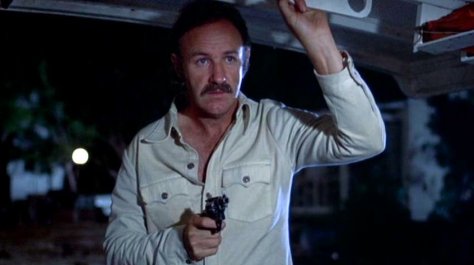 Night Moves – In Arthur Penn’s 1975 sleeper, which you could call an “existential noir”, Gene Hackman delivers one of his best performances as a world-weary P.I. with a failing marriage, who becomes enmeshed in a case involving battling ex-spouses, which soon slides into incest, smuggling and murder. Alan Sharp’s intelligent, multi-layered screenplay parallels the complexity of the P.I.’s case with ruminations on the equally byzantine mystery as to why human relationships, more often than not, almost seem engineered to fail. I think I’ve just talked myself into watching it again.

Strangers on a Train– There’s something that Wim Wenders’ The American Friend, Rene Clement’s Purple Noon (and Anthony Minghella’s 1999 remake, The Talented Mr. Ripley) all share in common with this 1951 Hitchcock entry (aside from all being memorable thrillers). They are all based on novels by the late Patricia Highsmith. If I had to choose the best of the aforementioned quartet, it would be Strangers on a Train.

Robert Walker gives his finest performance as tortured, creepy stalker Bruno Antony, who “just happens” to bump into his sports idol, ex-tennis star Guy Haines (Farley Granger) on a commuter train. For a “stranger”, Bruno has a lot of knowledge regarding Guy’s spiraling career; and most significantly, his acrimonious marriage.

As for Bruno, well, he kind of hates his father. A lot. The  silver-tongued sociopath Bruno is soon regaling Guy with a hypothetical scenario demonstrating how simple it would be for two “strangers” with nearly identical “problems” to make those problems vanish…by swapping murders. The perfect crime!

Of course, the louder you yell at your screen for Guy to get as far away from Bruno as possible, the more inexorably Bruno pulls him in. It’s full of great twists and turns, with one of Hitchcock’s most heart-pounding finales.

Sunset Boulevard – Leave it to that great ironist Billy Wilder to direct a film that garnered a Best Picture nomination in 1950 from the very Hollywood studio system it so mercilessly skewers (however, you’ll note that they didn’t let him win…the Best Picture statuette went to All About Eve that year). Gloria Swanson’s turn as a fading, high-maintenance movie queen mesmerizes, William Holden embodies the quintessential noir sap, and veteran scene-stealer (and legendary director in his own right) Erich von Stroheim redefines the meaning of “droll” in this tragicomic journey down the Boulevard of Broken Dreams. Wilder coscripted with Leigh Brackett and D.M. Marshman Jr.

Sweet Smell of Success– Tony Curtis gives a knockout performance in this hard-hitting 1957 drama as a smarmy press agent who shamelessly sucks up to Burt Lancaster’s JJ Hunsecker, a powerful NYC entertainment columnist who can launch (or sabotage) show biz careers with a flick of his poison pen (Lancaster’s odious, acid-tongued character was a thinly-disguised take on the reviled, Red-baiting gossip-monger Walter Winchell).

Although it was made over 60 years ago, the film retains its edge and remains one of the most vicious and cynical ruminations on America’s obsession with fame and celebrity. Alexander Mackendrick directed, and the sharp Clifford Odets/Ernest Lehman screenplay veritably drips with venom. James Wong Howe’s cinematography is outstanding. Lots of quotable lines; Barry Levinson paid homage in his 1982 film Diner, with a character who is obsessed with the film and drops in and out of scenes, incessantly quoting the dialogue.

Touch of Evil – Yes, this is  Orson Welles’ classic 1958 sleaze-noir with that celebrated (and oft-imitated) opening tracking shot, Charlton Heston as a Mexican police detective, and Janet Leigh in various stages of undress. Welles casts himself as Hank Quinlan, a morally bankrupt police captain who lords over a corrupt border town. Quinlan is the most singularly grotesque character Welles ever created as an actor, and stands as one of the most offbeat heavies in film noir.

This is also one of the last great roles for Marlene Dietrich (who deadpans “You should lay off those candy bars.”). The scene where Leigh is terrorized in an abandoned motel by a group of thugs led by a creepy, leather-jacketed Mercedes McCambridge could have been dreamed up by David Lynch; there are numerous such stylistic flourishes throughout that are light-years ahead of anything else going on in American cinema at the time. Welles famously despised the studio’s original 96-minute theatrical cut; there have been nearly half a dozen re-edited versions released since 1975.

One thought on “Run for the shadows: Top 10 Film Noirs”