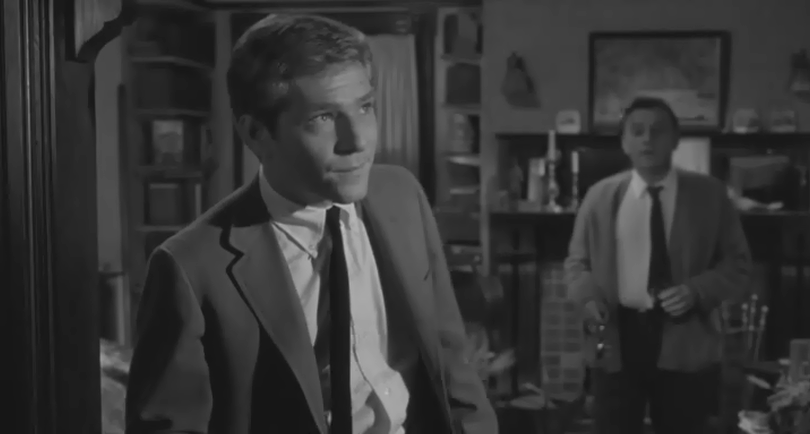 I was saddened to learn of George Segal’s passing earlier this week. I confess up front that I have zero awareness of his latter-career television work; but then again, I haven’t followed any network sitcoms with much interest since Seinfeld went off the air in 1998.

For me Segal’s visage will be forever associated with a streak of memorable film roles from the mid-60s through the late 70s (perusing his credits on the Internet Movie Database, I realized that apart from David O. Russell’s 1996 comedy Flirting with Disaster I have not seen any of Segal’s big screen work beyond Lost and Found (Melvin Frank’s disappointing 1979 sequel to his own 1973 romantic comedy A Touch of Class).

I will remember him for his masterful comic timing (he was the king of the reaction shot) but he also had great drama chops. He was also a decent banjo player (I searched in earnest for any instance where he may have jammed with Steve Martin…but alas, if it did happen, there is no extant footage). Here are my top 10 George Segal recommendations:

Bye Bye Braverman – Viewer caution: This film contains graphic depictions of extreme Jewishness (I’m allowed to say that…I’ve lived it). A lesser-known gem from Sidney Lumet, this 1968 comedy-drama follows the escapades of four Manhattan intellectuals (Segal, Joseph Wiseman, Jack Warden and Sorrell Booke) who pile into a red Beetle and spend a Sunday afternoon schlepping around Brooklyn searching for the funeral of a mutual friend who dropped dead following a coronary. Much middle-age angst ensues.

Episodic but bolstered by wonderful performances and several memorable scenes. My favorite involves a fender-bender with the great Godfrey Cambridge, playing a fast-talking cabbie who has converted to Judaism. Another great segment features Alan King as a rabbi giving an off-the wall eulogy. A scene where Segal delivers a soliloquy about modern society while strolling through a vast cemetery will now have added poignancy.

The screenplay was adapted from Wallace Markfield’s novel by Herb Sargent, who later become a top writer for Saturday Night Live from 1975-1995. Also in the cast: Phyllis Newman, Zohra Lampert and Jessica Walter (who also passed away this week, sadly).

California Split – While it has its share of protracted scenes and an unhurried, naturalistic rhythm you expect from Robert Altman, I think this 1974 comedy-drama is the director’s tightest, most economical film; I would even venture it’s damn near perfect.

A pro gambler (Elliot Gould) and a compulsive gambler with a straight day job (Segal) bond after getting roughed up and robbed by a sore loser and his pals in a poker parlor parking lot. Gould invites Segal to sleep over at his place, a house he shares with two self-employed sex workers (Ann Prentiss and Gwen Welles). The men become gambling buddies. Soon they are mutual enablers, spiraling down the rabbit hole of their addiction.

The film doubles as a beautifully acted character study and a fascinating, documentary-like dive into the myopic, almost subterranean subculture of the degenerate gambler. As Roger Ebert put it so beautifully in his original review of the film: “This movie has a taste in its mouth like stale air-conditioning, and no matter what time it seems to be, it’s always five in the morning in a second-rate casino.” Perceptive screenplay by actor Joseph Walsh, who also has a great cameo as a menacing loan shark.

The Hot Rock– Although it starts out as a by-the-numbers diamond heist caper, this 1972 Peter Yates film delivers a unique twist halfway through: the diamond needs to be stolen all over again (so it’s back to the drawing board). There’s even a little political intrigue in the mix. The film boasts a William Goldman screenplay (adapted from a Donald E. Westlake novel) and a knockout cast (Segal, Robert Redford Zero Mostel, Ron Leibman, Paul Sand and Moses Gunn). Redford and Segal make a great team, and the film finds a nice balance between suspense and humor. Lots of fun.

Loving – American Beauty meets The Prisoner of Second Avenue in this 1970 sleeper, directed by the eclectic Irvin Kershner (A Fine Madness, The Flim-Flam Man, Eyes of Laura Mars, Never Say Never Again). Segal is in his element as a freelance commercial illustrator and suburban dad on the verge of a nervous breakdown. Dissatisfied with his own work, on the rocks with both his wife (Eva Marie Saint) and his Manhattan mistress (Janis Young), he’s fighting an existential uphill battle trying to keep everyone in his life happy.

The story builds slowly, culminating in a near-classic party scene up there with the one in Hal Ashby’s Shampoo. Patient viewers will notice the film is well constructed and despite being made 50 years ago, still has much to say about modern manners and mores (all in the space of 90 minutes). The intelligent screenplay was adapted from J.M. Ryan’s novel by Don Devlin.

The Owl and the Pussycat – Segal plays a reclusive, egghead NYC writer and Barbra Streisand is a perfect foil in one of her best comedic turns as a profane, boisterous sex worker in this classic “oil and water” farce, directed by Herbert Ross. Serendipity throws the two odd bedfellows together one fateful evening, and the resulting mayhem is crude, lewd, and funny as hell. Buck Henry adapted his screenplay from Bill Manhoff’s original stage version. Robert Klein is wonderfully droll in a small but memorable role. My favorite line: “Doris…you’re a sexual Disneyland!”

The Terminal Man – Paging Dr. Jekyll! Segal is excellent in the lead as a gifted computer scientist who has developed a neurological disorder which triggers murderously psychotic blackout episodes. He becomes the guinea pig for an experimental cure that requires a microchip to be planted in his brain to circumvent the attacks.

Although it’s essentially “sci-fi”, this 1974 effort shares some interesting characteristics with the post-Watergate paranoid political thrillers that all seemed to propagate around that same time (especially The Parallax View, which also broached the subject of mind control). Director Mike Hodges (who directed the original version of Get Carter) adapted his screenplay from Michael Crichton’s novel.

A Touch of Class – Directed by Melvin Frank (The Court Jester, A Funny Thing Happened on the Way to the Forum) this 1973 film was co-written by the director with Jack Rose and Marvin Frank. Segal and Glenda Jackson make a great comedy tag team as a married American businessman and British divorcee who, following two chance encounters in London, realize there’s a mutual attraction and embark on an affair. The best part of the film concerns the clandestine lovers’ first romantic getaway on a trip to Spain. The story falters a bit in the third act, when it begins to vacillate a little clumsily between comedy and morality tale, but when it’s funny, it’s very funny.

Where’s Poppa? – If you are easily offended, do not go anywhere near this film. But if you believe nothing is sacred in comedy and enjoy laughing so hard that you plotz-see it.

Where do I start? Carl Reiner’s 1970 black comedy (adapted by Robert Klane from his own novel) concerns a New York City attorney (Segal) who lives in a cramped apartment with his senile mother (Ruth Gordon). Honoring a deathbed promise to his dearly departed poppa, Segal takes care of his mother (well, as best he can). She is a…handful.

The beleaguered Segal’s day begins with prepping his mother’s preferred breakfast of 6 orange slices and a heaping bowl of Pepsi and Lucky Charms (interestingly, in California Split Segal himself is served a breakfast of beer and Fruit Loops by the two sex workers).

His businessman brother (Ron Leibman) is too “busy” to help, so Segal must hire nurses to take care of ma while he’s at work. Unfortunately, she has a habit of driving them away with her over-the-top behavior. When Segal falls head-over-heels in love with the latest hire (Trish Van Devere, in a priceless performance), his thoughts about how he’s going to “take care” of ma and keep this blossoming romance abloom become…darker.

Segal was rarely so hilariously exasperated as he gets here, it’s Gordon’s best (and most outrageous) comic performance, and the supporting cast (which includes Barnard Hughes, Vincent Gardenia, Paul Sorvino and Garrett Morris) is aces. Again, this film is not for all tastes (it would never get green-lighted now) …but rates as one of my all-time favorite comedies.

Who’s Afraid of Virginia Woolf? – If words were needles, university history professor George (Richard Burton) and his wife Martha (Elizabeth Taylor) would look like a pair of porcupines, because after years of shrill, shrieking matrimony, these two have become maestros of the barbed insult, and the poster children for the old axiom, “you only hurt the one you love”. Mike Nichols’ 1966 directing debut (adapted by Ernest Lehman from Edward Albee’s Tony-winning stage play) gives us a peek into one night in the life of this battle-scarred middle-aged couple.

After a faculty party, George and Martha invite a young newlywed couple (Segal and Sandy Dennis) over for a nightcap. As the ever-flowing alcohol kicks in, the evening becomes a veritable primer in bad human behavior. It’s basically a four-person play, but these are all fine actors, and the writing is the real star of this piece.

Here are some additional George Segal films worth a look:

Who is Killing the Great Chefs of Europe? (1978; comedy-mystery, dir. Ted Kotcheff)