Being a renowned film critic on the blogosphere, I am often stopped by strangers on the street; and if there is one question that I am inevitably going to be asked, it is this one:

Maybe after that question, the one I am most frequently asked is:

“What ever made you think other people might care about your opinions on cinema?”

Well, if you must pry (“I must! I must!”), there are a couple pop cultural touchstones that nudged me toward upgrading from Annoying Movie Geek Who Never Shuts Up at Parties to Aspiring Film Critic. First, there was this 1985 panel by Matt Groening: 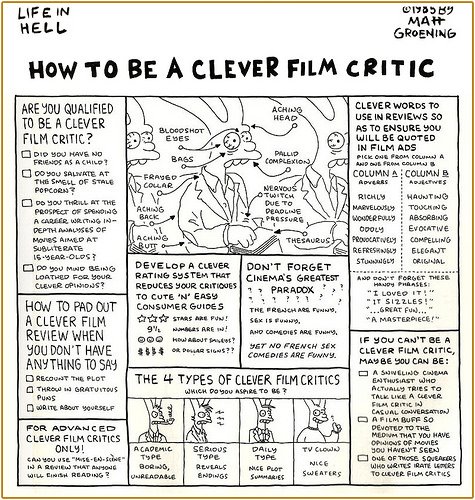 Depending on your screen size, the graphics may not be 100% legible, but here’s the gist:

Are you qualified to be a clever film critic?

The four types of clever film critics: Which do you aspire to be?

For advanced clever film critics only:

Can you use “mise-en-scène” in a review that anyone will finish reading?

“Hey,” I thought, after passing milk and Cocoa Puffs through my nose, “I could do that!” Unfortunately, however, the internet hadn’t quite taken off yet, and if you wanted to be a clever film critic you still had to try to get a job at like, an actual newspaper or something. Besides, I was too busy at the time chasing a broadcasting career (funnily enough, after 35 years in the business, I’m still “chasing” it).

All kidding aside, there was a more significant touchstone for me, which preceded Groening’s satirical yet weirdly empowering observations. In the late 70s, I was living in Fairbanks, Alaska. This was not the ideal environment for a movie buff. At the time, there were only two single-screen movie theaters in town. To add insult to injury, we were usually several months behind the Lower 48 on “first-run” features (it took us nearly a year to even get Star Wars).

Also keep in mind, there was no cable service in the market, and the video stores were a still a few years down the road. There were occasional screenings of midnight movies at the University of Alaska, and the odd B-movie gem on late night TV, but that was it. Sometimes, I’d gather up a coterie of my fellow culture vulture pals for the 260 mile drive to Anchorage, where they had more theaters.

Consequently, due to the lack of venues, I was reading more about movies, than actually watching them. I remember poring over back issues of The New Yorker at the public library, soaking up Penelope Gilliat and Pauline Kael, and thinking they had a pretty cool gig; but it seemed requisite to  live in NYC (or L.A.) to be taken seriously as a film critic (most of those films just didn’t make it out to the sticks).

Then, in 1978, our local PBS television affiliate began carrying a bi-weekly 30-minute program called Sneak Previews. Now here was something kind of interesting; a couple of guys (kind of scruffy lookin’) casually bantering about current films-who actually seemed to know their shit. You might even think they were professional movie critics…which it turned out they were.

In fact, they were professional rivals; Roger Ebert and Gene Siskel wrote for competing Chicago dailies, the Chicago Sun Times and the Chicago Tribune . This underlying tension between the pair was always bubbling just under the surface, but imbued the show with an interesting dynamic (especially when they disagreed on a film).

Still, I always got a vibe that they treated each other with respect (if begrudging at times) and most importantly, treated the viewers with respect as well. You never felt like they were talking above your head, like some of the traditional film essayists who were “boring, unreadable” (as Matt Groening describes the “academic types” in his panel above). Nor did they condescend, either.

This is where I part ways with Groening; his “TV clowns” reference above is clearly directed at Siskel & Ebert, but I would reserve that description for someone more along the lines of a Gene Shalit. One thing these two did share was an obvious and genuine love and respect for the art of cinema; and long before the advent of the internet, I think they were instrumental in razing the ivory towers and demystifying the art of film criticism (especially for culturally starved yahoos like me, living on the frozen tundra).

Last weekend, with minimal fanfare, A.O. Scott and Michael Phillips, the most recent hosts of At the Movies (the long-running weekly syndicated review show that Siskel & Ebert created after they parted ways with the producers of Sneak Previews back in 1982) each gave their farewell soliloquy and quietly closed up the balcony for good.

That’s too bad, because during their relatively brief tenure, Scott and Phillips brought an erudite and thoughtful discourse to the show that had been sorely lacking for some time. To be sure, the program went through a lot of personnel changes over the years, and not always for the best (would it be tacky to mention Ben Lyons by name?). Although Ebert remained a stalwart fixture until health issues precipitated his 2006 departure, I thought that the show never quite recovered from the absence of Siskel (who died in 1999).

As Scott and Phillips rolled a collage of vintage Siskel & Ebert clips, I found myself unexpectedly choking up a little. Granted, the model pioneered by Siskel and Ebert may now seem staid and hoary in the era of Rotten Tomatoes, but its historical importance and effect on some of us “of a certain age” cannot be overlooked.

So Roger, should you happen to be reading this (not likely, but I can dream, can’t I?) and to Gene, wherever you may be, somewhere out there in the ether: FWIW, I humbly offer my two enthusiastic thumbs up.