I know you didn’t ask, but being that it’s “that time of year” for the inevitable Top 10 lists, AND “that time of the decade” as well, I thought I might offer up my picks for (tympani roll, please) the Top 10 films of uh, erm…WTF do we call it-the “Aughts”?

At any rate, here for your consideration, edification, or (most likely reaction) eternal damnation, is my list, subjective as hell (please keep grain of salt handy). As per usual, they are presented in alphabetical order, NOT in order of preference or rank. Cheers…

Amelie-I know this one has its haters (?!), but Jean-Pierre Juenet’s beautifully realized film stole this reviewer’s heart. Audrey Tautou lights up the screen as a gregarious loner who decides to become a guardian angel (and benign devil) and commit random, anonymous acts of kindness. The plight of Amelie’s “people in need” is suspiciously similar to her own-those who need that little push to come out of self-imposed exiles and revel in life’s simple pleasures. Of course, our heroine is really in search of her own happiness and fulfillment. Does she find it? You’ll have to see for yourself. Whimsical, original, humanistic and life-affirming, Amelie will melt the most cynical of hearts. 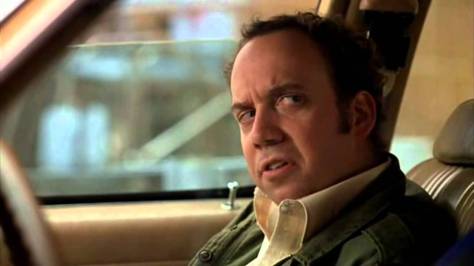 American Splendor– From the streets of Cleveland! Paul Giamatti was born to play underground comic writer Harvey Pekar, the misanthropic file clerk/armchair philosopher who became a cult figure through his collaborations with legendary illustrator R. Crumb. Co-directors Shari Berman and Robert Pulcini keep their biopic fresh and engaging via some unusual choices, like breaking down the fourth wall by having the real Pekar interacting with Giamatti in several scenes; it’s quite effective. Hope Davis is excellent as Pekar’s deadpan wife. Thoroughly engaging and surprisingly moving at times, this is one film that genuinely “made me laugh and made me cry”-and I don’t say that very often.

The Brotherhood of the Wolf– If I told you that the best martial arts film of the decade features an 18th-century French libertine/naturalist/philosopher and his enigmatic “blood-brother” (an Iroquois mystic) who are on the prowl for a huge, supernaturally cunning man-eating creature that is terrorizing the countryside-would you avoid eye contact with me and quickly scurry to the other side of the street? (I thought so.) Christophe Gans’ film defies category; Dangerous Liaisons meets Captain Kronos-Vampire Hunter by way of Crouching Tiger, Hidden Dragon is the best I can do for you. Regardless, this lushly photographed and handsomely produced epic is exciting, sexy, and one-of-a-kind.

The Fellowship of the Ring-Taken as a whole, Peter Jackson’s gargantuan film trilogy adaptation of J.R.R. Tolkien’s revered fantasy-adventure is not without its flaws (and fanboy-lamented abridgements and revisions), but he damn near gets it all pitch-perfect in the first installment. Even though it is only the beginning of the epic tale, the original book was always my favorite volume. I think it’s because it sparks that joy of first discovering Tolkien’s wondrous fantasy world, and Jackson’s film does it proud. The two sequels tend to go a little over the top, but this film maintains a perfect blend of character, heart, and rousing heroics; not to mention an immersive sense of mythic time and place.

Man on the Train-There are a only a handful of films I have seen in my lifetime that I have become  emotionally attached to, sometimes for reasons I can’t always comprehend (Koyaanisqatsi and Local Hero spring to mind). This is one of them. Perhaps best described as an “existential noir”, Patrice LeConte’s relatively simple tale of two men in the twilight of their life with completely disparate life paths (a retired poetry teacher and a career felon) forming an unexpectedly deep bond turns into an equally unexpectedly transcendent film experience. French pop star Johnny Hallyday and the wonderful screen veteran Jean Rochefort deliver revelatory performances. I feel an urge to go watch it now. 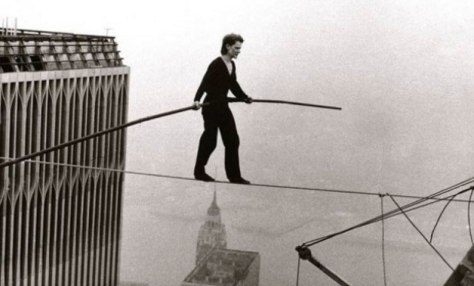 Man on Wire– Late in the summer of 1974, a diminutive Frenchman named Philippe Petit took a casual morning stroll across a ¾” steel cable, stretched between the two towers of the then-unfinished World Trade Center. On the surface, this may appear to be a straightforward documentary about this eccentric high wire artist who was either incredibly brave, or incredibly stupid. In actuality, it is one of the best suspense/heist movies of the decade, although no guns are drawn and nothing gets stolen. It is also very romantic, although it is not a traditional love story. Like Petit’s sky-high walk itself, James Marsh’s film is ultimately an act of pure aesthetic grace, and deeply profound. (Full review)

The Mayor of the Sunset Strip– This amazing rockumentary, an alternately exhilarating and melancholy portrait of L.A. music scene fixture Rodney Bingenheimer was directed by George Hickenlooper (Factory Girl). The diminutive, skittish and soft-spoken Rodney comes off like Andy Warhol’s west coast doppelganger. Although the film is ostensibly “about” Rodney, it is ultimately a whirlwind time trip through rock music’s evolution, filtered through a coked-out L.A. haze and informed by its subject’s Zelig-like propensity to have been photographed with seemingly everybody who was ever anybody in the business. So is he a true “rock impresario”, or just a glorified Rupert Pupkin? You decide.

Memories of Murder-Buoyed by its artful production and knockout performances, this brutal, uncompromising police procedural from director Joon-ho Bong really gets under your skin. Based on the true story of South Korea’s first known serial killer, it follows a pair of rural homicide investigators as they search for a prime suspect. Initially, they seem bent on instilling more fear into the local citizenry than the lurking killer, as they proceed to violate every civil liberty known to man. Soon, however, the team’s dynamic is tempered by the addition of a more cool-headed detective from Seoul, who takes the profiler approach. The film doubles as a fascinating glimpse into modern Korean culture.

Spirited Away-Innovative Japanese anime master Hayao Miyazaki has made a lot of great films, but this may well be his crowning achievement. A young girl and her parents inadvertently stumble into a resort spa reserved exclusively for traditional Japanese deities and other assorted denizens of the spirit world. Needless to say, this “security breach” throws the phantasmagorical residents into quite a tizzy; Mom and Dad are turned into barnyard animals and their daughter has to rely on her wits and previously untapped inner strength to save them. Visually stunning and imaginative beyond description, it also tells a beautiful story-funny, touching, exciting and empowering.

There Will Be Blood– What you see in the dialog-free prologue of Paul Thomas Andersons’ gripping epic may not be as seminal as Kubrick’s “dawn of man” sequence in 2001, but it does put the focus on something just as primordial. It is something that is buried deep within the capitalist DNA-the relentless drive to amass wealth and power through willful exploitation and opportunism. And this very American “ideal” (love it or loathe it) has never been so perfectly embodied as it is in Daniel Day Lewis’ magnificent performance as self-made oil man Daniel Plainview. In his worldview, you are either with him, or you are his “competitor”. And trust me-he WILL “…drink your milkshake”. (Full review)