I’m not running for office, so I’m not going to lie to you. It’s been a tough week. Not just for me, personally…but for Democracy and junk. Most of today, I was trying (really trying, gentle reader) to finish up a review for you of a couple of new films, but it wasn’t working. I haven’t been able to concentrate very well since the events of this past Wednesday. I just…can’t.

So I was texting with my pal Digby, to give her a heads up that I might just take a breather this week. Or perhaps I could just find something from my archives to recycle that would be apropos to the current news cycle. My first thought was “conspiracy a go-go”…but then I remembered I just recycled that one back in November on the anniversary of the JFK assassination. Besides, I don’t think we need to get that dark just now. “What about something on fascism?” (Digby helpfully texted). Yes! I thought. A capital idea (Capitol?).

And I’ll be damned if I didn’t find a post I published the day after the current occupant of the White House was inaugurated that makes a perfect bookend for the imminent denouement of said occupant’s rent-free overstayed welcome in our collective unconscious . Er, enjoy?

Yesterday, after putting my head down on the desk for a spell (which I haven’t done since kindergarten), in order to process the inaugural address, I felt compelled to do a Google search using the key words “Fascism” and “ideal conditions” – and I found this:

Fascism begins by promising to make the country strong again, to restore pride. It wants to help, it wants to build a better country, it wants to improve your life. It wants to challenge a corrupt establishment and change a broken system. It wants to get people working again and get tough on crime. It doesn’t present an image of violent thugs to you, instead it shows the face of ordinary respectable people, people just like you, who have had enough. […]

So it starts with things a lot of people find attractive: national pride, restoration of glory, fighting the establishment. Then it pushes this further and further to the extreme. The nationalism becomes more extreme. Not only are we the best people, but all others are inferior. They only appear better because they cheat, they lie, they steal. The establishment is corrupt, the system is rigged, it is undeserving of support, it is illegitimate. The opponents are crooks, they should be put in jail. The media is suppressing the facts, censoring the truth, spreading lies, their dishonesty must be silenced.  Democracy only leads to indecisive and ineffective politicians, it only elects liars too corrupt to serve the people. If only we had a strong and decisive ruler, then we could solve the country’s problems. Drastic problems require drastic solutions.

-from a post by Robert Nielsen (Whistling in the Wind blog)

The author is explaining how Fascism was able to flourish in Europe between the wars, but there are obvious parallels with the current political climate (in Europe and the U.S.).

So, with that cheery thought in mind, and in the interest of applying what I call cinematic aversion therapy, here’s my Top 10 Great Depression Movies. Study them well, because you know what “they” say: Those who do not understand history are doomed to repeat it.

Berlin Alexanderplatz- When you think of the Depression in terms of film and literature, it tends to vibe America-centric. In reality, the economic downturn between wars was a global phenomenon; things were literally “tough all over”. You could say Germany had a jumpstart (economically speaking, everything below the waist was kaput by the mid 1920s). In October of 1929 (interesting historical timing), Alfred Doblin’s epic novel Berlin Alexanderplatz was published, then adapted into a film in 1931 directed by Phil Jutzi.

It wasn’t until nearly 50 years later that the ultimate film version emerged as Rainer Werner Fassbinder’s 15 hour opus (made for German TV but also distributed as a feature film). It’s nearly impossible to encapsulate this emotionally draining epic in a few lines; it is by turns one of the most shocking, transcendent, maddening and soul-scorching films you’ll ever see. If that time investment is too daunting, you can always opt for Cabaret!

Bonnie and Clyde– The gangster movie meets the art house in this 1967 offering from director Arthur Penn. There is much more to this influential masterpiece than the oft-referenced operatic crescendo of violent death in the closing frames; particularly of note was the ingenious way its attractive antiheroes were posited to appeal to the counterculture zeitgeist of the 1960s, even though the film was ostensibly a period piece. The real Bonnie Parker and Clyde Barrow were nowhere near as charismatic as Faye Dunaway and Warren Beatty…but we don’t care, do we? The outstanding cast includes Gene Hackman, Estelle Parsons, Michael J. Pollard, and Gene Wilder in his movie debut.

Bound for Glory– “This machine kills Fascists”. There’s only one man to whom Pete Seeger, Bob Dylan and Bruce Springsteen must kowtow-and that’s Woody Guthrie. You can almost taste the dust in director Hal Ashby’s leisurely, episodic 1976 biopic about the life of America’s premier protest songwriter/social activist. David Carradine gives one of his finest performances, and does a credible job with his own singing and playing. Haskell Wexler’s outstanding cinematography earned him a well-deserved Oscar. The film may feel a bit overlong and slow in spots if you aren’t particularly fascinated by Guthrie’s story; but I think it is just as much about the Depression itself, and perhaps more than any other film on this list, it succeeds as a “total immersion” back to that era. 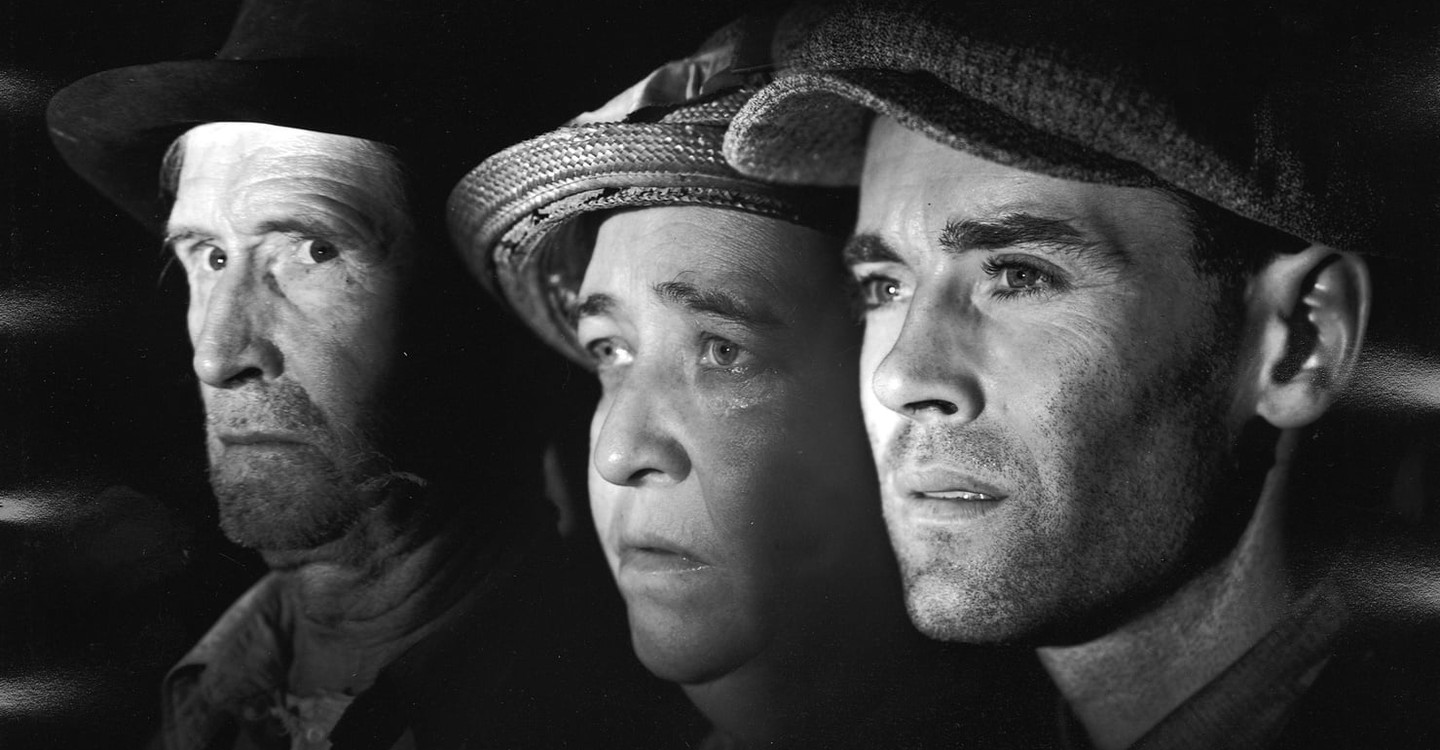 The Grapes of Wrath– I’m stymied for any hitherto unspoken superlatives to ladle onto John Ford’s masterful film or John Steinbeck’s classic source novel, so I won’t pretend to have any. Suffice it to say, this comes closest to nabbing the title as the quintessential film about the heartbreak and struggle of America’s “salt of the earth” during the Great Depression. Perhaps we can take (real or imagined) comfort in the possibility that no matter how bad things get over the next few months (years?), Henry Fonda’s unforgettable embodiment of Tom Joad will “be there…all around, in the dark.”

Inserts-If I told you that Richard Dreyfuss, Veronica Cartwright, Bob Hoskins and Jessica Harper once co-starred in an “X” rated movie, would you believe me? This largely forgotten 1976 film from director John Byrum was dismissed as pretentious dreck by many critics at the time, but 42 years on, it begs reappraisal as a fascinating curio in the careers of those involved.

King of the Hill– Steven Soderbergh’s exquisitely photographed film (somewhat reminiscent of Bogdanovich’s Paper Moon) is a bittersweet rendering of A.E. Hotchner’s Depression-era tale about young Aaron (Jesse Bradford) who lives with his parents and kid brother in a decrepit hotel. After his sickly mother (Lisa Eichhorn) is sent away for convalescence, his kid brother is packed off to stay with relatives, and his father (Jeroen Krabbe) hits the road as a traveling salesman, leaving Aaron to fend for himself.

The Grand Hotel-style network narrative provides a microcosm of those who live through such times. The film is full of wonderful moments of insight into the human condition. The cast includes Karen Allen, Adrian Brody, Elizabeth McGovern and Spaulding Gray.

Bob Hoskins is outstanding as a married traveling sheet music salesman in Depression-era England whose life takes interesting Potter-esque turns once he becomes smitten by a young rural schoolteacher (Cheryl Campbell) who lives with her widowed father and two extremely creepy brothers. Probably best described as a film noir musical.

Sullivan’s Travels-A unique and amazingly deft mash-up of romantic screwball comedy, Hollywood satire, road movie and hard-hitting social drama that probably would not have worked so beautifully had not the great Preston Sturges been at the helm. Joel McCrea is pitch-perfect as a director of goofy populist comedies who yearns to make a “meaningful” film.

Racked with guilt about the comfortable bubble that his Hollywood success has afforded him and determined to learn firsthand how the other half lives, he decides to hit the road with no money in his pocket and “embed” himself as a railroad tramp (much to the chagrin of his handlers). He is joined along the way by an aspiring actress (Veronica Lake, in one of her best comic performances). His voluntary crash-course in “social realism” turns into more than he had bargained for.

Lake and McCrea have wonderful chemistry. The Coen Brothers borrowed the title of the fictional film within the film for their own unique take on the Depression, O Brother, Where Art Thou?

They Shoot Horses, Don’t They? – “Yowsa, yowsa, yowsa!” This richly decadent allegory about the human condition (adapted from Horace McCoy’s novel) is one of the grimmest and most cynical films ever made. Director Sydney Pollack assembled a crack ensemble for this depiction of a Depression-era dance marathon from Hell: Jane Fonda, Gig Young (who snagged a Best Supporting Actor Oscar), Susannah York, Bruce Dern and Red Buttons are all outstanding; Pollack even coaxes the wooden Michael Sarrazin into his finest performance. The powerful ending is devastating and difficult to shake off.

Thieves Like Us-This loose remake of Nicholas Ray’s 1949 film noir classic They Live by Night is the late Robert Altman’s most underrated film. It is often compared to Bonnie and Clyde, but stylistically speaking, the two films could not be farther apart. Altman’s tale of bank-robbing lovers on the lam (Keith Carradine and Shelley Duvall) is far less flashy and stylized, but ultimately more affecting thanks to a consistently naturalistic, elegiac tone throughout.

Carradine and Duvall really breathe life into their doomed couple; every moment of intimacy between them (not just sexual) feels warm, touching, and genuine-which gives the film real heart. Altman adapted the screenplay (with co-writers Joan Tewkesbury and Calder Willingham) from the same source novel (by Edward Anderson) that inspired Ray’s earlier film.