(I originally posted this over at Hullabaloo on September 14, 2013. I’m re-posting it with no revisions, because sadly, it’s relevant once more.)

-From “War Weary World” by The Call

(*sigh*) So the boys are rattling their sabers yet again, and America girds its collective loins for possible involvement in Syraqistan or wherever (different day, same old shit). So far, it’s a war of words, and I sincerely hope it stays that way (sticks and stones, and all that).

Most disturbing to me about this whole affair is how that endlessly-looped footage of gassed children is being used as a war mongering tool by our own government and an ever-compliant MSM. Yes, it’s horrible beyond words and a reprehensible act by any standards, but I seem to recall a brief and shining moment in this country when such imagery was processed as deterrence to conflict and a call for diplomacy, rather than a base and puerile incitement for vengeance (are American bombs any more discriminate?).

But perhaps I’m the one being childish, what with my naive pacifist wishes and hippy-dippy poster dreams. It’s a complicated world, and I’m just a simple farmer. A person of the land. The common clay of the American West. You know…a moron. That’s why I’m just the movie guy around these parts.

That being said, I believe there’s something that the following movies, or more specifically their young protagonists can teach us about such matters.

And so I’m spotlighting three essential films that offer an immediate ground-level view of the effects of war, filtered through the eyes of innocents, uncluttered by any political machinations or jingoist agendas. Hey, feel free to invite your favorite war hawk over for dinner and a movie. Just make sure that they are taking notes:

Grave of the Fireflies– For many years, the term ‘anime’ conjured up visions of saucer-eyed cartoon characters in colorful, action-packed fantasy-adventures (generally targeting younger audiences). However, sometime around the mid-80s, the paradigm shifted when Japanese production houses like Studio Ghibli began to find international success with more eclectic, character-driven fare. One particularly transcendent example is writer-director Isao Takahata’s 1988 drama, Grave of the Fireflies.

While it is animated, and its protagonists are children, it is not necessarily a children’s film; its unflinching approach and anti-war subtext puts it in a league with Roberto Rossellini’s Germany Year Zero and Andrei Tarkovsky’s Ivan’s Childhood.

The story (based on Akiyuki Nosaka’s novel) takes place in Kobe in 1945, and concerns the travails of a teenage boy named Seita (voiced by Tsutomo Tatsumi) and his little sister Setsuko (voiced by Ayano Shiraishi), who are orphaned when their mother perishes during an Allied firebombing raid. After brief lodgings with a less-than-hospitable aunt, the siblings have to fend for themselves. Do not expect a Hollywood ending (I wouldn’t recommend  it for children under 12).

One commonality between Grave of the Fireflies and the aforementioned Rossellini film worth consideration is that Japan and Germany were the aggressor nations in WW2. An obvious commonality, but precisely my point: The pain and suffering of innocents caught in the crossfire doesn’t know from borders or ideology.

Son of Babylon– This heartbreaking Iraqi drama is set in 2003, just weeks after the fall of Saddam. It follows the arduous journey of a Kurdish boy named Ahmed (Yasser Talib) and his grandmother (Shazda Hussein) as they head for the last known location of Ahmed’s father, who disappeared during the first Gulf War.

As they traverse the bleak, post-apocalyptic landscapes of Iraq’s bomb-cratered desert, a portrait emerges of a people struggling to keep mind and soul together, and to make sense of the horror and suffering precipitated by two wars and a harsh dictatorship.

Director Mohamed Al Daradji and co-screenwriter Jennifer Norridge deliver something conspicuously absent in the Iraq War(s) movies from Western directors in recent years-an honest and humanistic evaluation of the everyday people who inevitably get caught in the middle of such armed conflicts-not just in Iraq, but in any war, anywhere.

While the film alludes to the regional and international politics involved, the narrative is constructed in such a way that at the end of day, whether Ahmed’s father was killed by American bomb sorties or Saddam gassing his own people is moot.

That message is distilled in a small, compassionate gesture and a single line of dialogue. An Arabic-speaking woman, also searching for a missing loved one at a mass grave site sets her own suffering aside to lay a comforting hand on the lamenting grandmother’s shoulder. “I’m sorry, I don’t speak Kurdish,” she says, “…but I can feel this woman’s pain and sadness.”

One thing I can say (aside that this emotionally shattering film should be required viewing for heads of state, commanders-in-chief, generals, or anyone else wielding the power to wage war)…I don’t speak Kurdish, either. 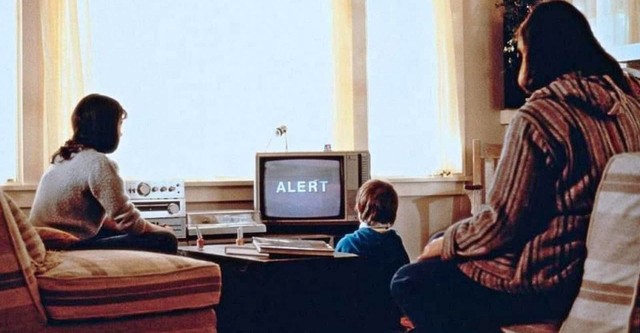 Alexander, her husband (William DeVane) and three kids live in sleepy Hamlin, California, where the afternoon cartoons are interrupted by a news flash that a number of nuclear explosions have occurred in New York. Then there is a flash of a whole different kind when nearby San Francisco (where DeVane has gone on a business trip) receives a direct strike.

There is no exposition on the political climate that precipitates the attacks; a wise decision by the filmmakers because it helps us zero in on the essential humanistic message of the film. All of the post-nuke horrors ensue, but they are presented sans the histrionics and melodrama that informs many entries in the genre. The fact that the nightmarish scenario unfolds so deliberately, and amid such everyday suburban banality, is what makes it all so frighteningly believable and difficult to shake off.

As the children (and adults) of Hamlin succumb to the inevitable scourge of radiation sickness and steadily “disappear”, like the children of the ‘fairy tale’ Hamlin, you are left haunted by the final line of the school production of “The Pied Piper” glimpsed earlier in the film…“Your children are not dead. They will return when the world deserves them.”