I thought I’d paw through the “sci-fi” section of my collection and share ten of my favorites. Keep in mind that these are personal favorites; I was careful not to title the post “Top 10 Sci-fi Movies of All Time” (there is no more surefire way to spark a virtual bare-knuckled fracas). Anyway, here are 10 off-world adventures awaiting you now…

Good raised this warning in 1965, about the same time director Stanley Kubrick and sci-fi writer Arthur C. Clarke were formulating the narrative that would evolve into both the novel and film versions of 2001: a Space Odyssey. And it’s no coincidence that the “heavy” in 2001 was an ultra-intelligent machine that wreaks havoc once its human overseers lose “control” …Good was a consultant on the film.

Good was but one of the experts that Kubrick consulted, before and during production of this meticulously constructed opus. Not only did he pick the brains of top futurists and NASA engineers, but enlisted the best primatologists, anthropologists, and uh, mimes of his day, to ensure every detail, from the environment of prehistoric humans living on the plains of Africa to the design of a moon base, passed with veracity.

In appreciation of this effort, at least once a year I will schedule a 3 hour block of time to turn off my phone, shut down my laptop, sit down calmly, take a stress pill, re-watch Kubrick’s masterpiece…and think things over.

Blade Runner – What truly defines “being human”? Philosopher Jean-Paul Sartre wrote that “existence precedes and rules essence”. One must assume that he was talking about human beings, because after all, he was one, offering his (“its”?) definition as to what “being human” is. Which begs this question: what sparks “existence”? To which people usually answer some “thing” or some “one”. Such questions and suppositions form the core of Blade Runner, which is based on Philip K. Dick’s novel Do Androids Dream of Electric Sheep?

Ridley Scott’s 1982 sci-fi noir is set a dystopian near-future where the presence of commercially manufactured “replicants” (near-humans with specialized functions and a built-in 4-year life span) has become routine. The “blade runner” of note is Deckard (Harrison Ford), whose job is to hunt down and “retire” aberrant replicants.

Also in the cast: Sean Young, Rutger Hauer, M. Emmet Walsh, Edward James Olmos, Brion James and Daryl Hannah. The film’s amazing production design makes it one of cinema’s most immersive “speculative futures” this side of 2001: A Space Odyssey.

The Day the Earth Caught Fire– Written and directed by Val Guest, this cerebral mix of conspiracy a-go-go and sci-fi (from 1961) has always been a personal favorite of mine. Simultaneous nuclear testing by the U.S. and Soviets triggers an alarmingly rapid shift in the Earth’s climate. As London’s weather turns more tropical by the hour, a Daily Express reporter (Peter Stenning) begins to suspect that the British government is not being 100% forthcoming on the possible fate of the world. Along the way, Stenning has some steamy scenes with his love interest (sexy Janet Munro). The film is more noteworthy for its smart, snappy patter than its run-of-the-mill f/x, but still delivers a compelling narrative. Co-starring the great Leo McKern (who steals every scene he’s in).

Fantastic Planet – Director Rene Laloux’s imaginative 1973 animated fantasy (originally  La planete sauvage) is about a race of mini-humans called  Oms, who live on a distant planet and have been enslaved (or viewed and treated as dangerous pests) for generations by big, brainy, blue aliens called the Draags. We follow the saga of Terr, an Om who has been adopted as a house pet by a Draag youngster. Equal parts Spartacus, Planet of the Apes, and that night in the dorm you took too many mushrooms, it’s at once unnerving and mind-blowing.

Last Night – A profoundly moving low-budget wonder from writer/director/star Don McKellar. The story intimately focuses on several Toronto residents and how they choose to spend (what they know to be) their final 6 hours. You may recognize McKellar from his work with director Atom Egoyan. He must have been taking notes, because as a director, McKellar has inherited Egoyan’s quiet, deliberate way of drawing you straight into the emotional core of his characters.

Although generally somber in tone, there are some laugh-out-loud moments, funny in a wry, gallows-humor way. The powerful final scene packs an almost indescribably emotional wallop. You know you’re watching a Canadian version of the Apocalypse when the #4 song on the “Top 500 of All Time” is by… Burton Cummings! 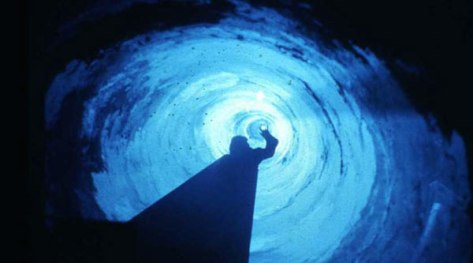 The Lathe of Heaven – Adapted by Diane English from the late Ursula K. Le Guin’s classic novel and directed by Fred Barzyk and David Loxton, this film was produced by Thirteen/WNET-TV in New York and originally aired on PBS stations in 1979.

The story takes place in “near future” Portland, at a time when the Earth is suffering  profound effects from global warming and pandemics are rampant (rather prescient, eh?) The film stars Bruce Davison as George Orr, a chronic insomniac who has become convinced that his nightly dreams are affecting reality. Depressed and sleep-deprived, he overdoses on medication and is forced by legal authorities to seek psychiatric help from Dr. William Haber (Kevin Conway), who specializes in experimental dream research.

When Dr. Haber realizes to his amazement that George is not delusional, and does in fact have the ability to literally change the world with his “affective dreams”, he begins to suggest reality-altering scenarios to his hypnotized patient. The good doctor’s motives are initially altruistic; but as George catches on that he is being used like a guinea pig, he rebels. A cat and mouse game of the subconscious ensues; every time Dr. Haber attempts to make his Utopian visions a reality, George finds a way to subvert the results.

The temptation to play God begins to consume Dr. Haber, and he feverishly begins to develop a technology that would make George’s participation superfluous. So begins a battle of wills between the two that could potentially rearrange the very fabric of reality.

This is an intelligent and compelling fable with thoughtful subtext; it is certainly one of the best “made-for-TV”  sci-fi films ever produced. Don’t let the low-tech special effects throw you, either (remember, this was made for public TV in 1979 on a shoestring).

Man Facing Southeast – Writer-director Eliseo Subiela’s 1986 drama is a deceptively simple tale of a mysterious mental patient (Hugo Soto) who no one on staff at the facility he is housed in can remember admitting. Yet, there he is; a soft-spoken yet oddly charismatic young man who claims to be an extra-terrestrial, sent to Earth to save humanity from themselves. He develops a complex relationship with the head psychiatrist (Lorenzo Quinteros) who becomes fascinated with his case. While sold as a “sci-fi” tale, it’s hard to pigeonhole; the film is equal parts fable,  family drama, and Christ allegory (think King of Hearts meets The Day the Earth Stood Still). Powerful and touching.

Several years after retiring his “Ziggy Stardust” persona, Bowie was coaxed back to the outer limits of the galaxy to play Thomas Jerome Newton, an alien from a drought-stricken planet who crash-lands on Earth. Gleaning Earth as a water source, Newton formulates a long-range plan for transporting the precious resource back to his home world. In the interim, he becomes an enigmatic hi-tech magnate. A one-of-a-kind film, with excellent supporting performances from Candy Clark, Rip Torn and Buck Henry.

The Quiet Earth -Bruno Lawrence (Smash Palace) delivers a tour de force performance in this 1985 film from New Zealand. He plays a scientist who may (or may not) have had a hand in a government research project mishap that has apparently wiped out everyone on Earth except him. The plot thickens when he discovers that there are at least two other survivors-a man and a woman.

The three-character dynamic is reminiscent of a 1959 nuclear holocaust tale called The World, the Flesh and the Devil, but it’s safe to say that the similarities end there. By the time you reach the mind-blowing finale, you’ll find yourself closer to Andrei Tarkovskiy territory. Director Geoff Murphy never topped this effort; although his 1992 film Freejack, with Mick Jagger as a time-traveling bounty hunter, is worth a peek on a slow night.

Slaughterhouse Five – Film adaptations of Kurt Vonnegut stories have a checkered history; from downright awful (Slapstick of Another Kind) or campy misfires (Breakfast of Champions) to passable time killers (Happy Birthday, Wanda June, Mother Night). For my money, your best bets are Jonathan Demme’s 1982 PBS American Playhouse short Who Am I This Time? and this 1974 feature by director George Roy Hill.

Michael Sacks stars as milquetoast daydreamer Billy Pilgrim, a WW2 vet who weathers the devastating Allied firebombing of Dresden as a POW. After the war, he marries his sweetheart, fathers a son and daughter and settles into a comfortable middle-class life, making a living as an optometrist.

So far, that’s a standard all-American postwar scenario, nu? Except for the part where a UFO lands on his nice manicured lawn one night and spirits him off to the planet Tralfamadore, after which he becomes permanently “unstuck” in time; i.e., begins living (and re-living) his life in random order. Great performances from Valerie Perrine and Ron Leibman. Stephen Geller adapted the script.